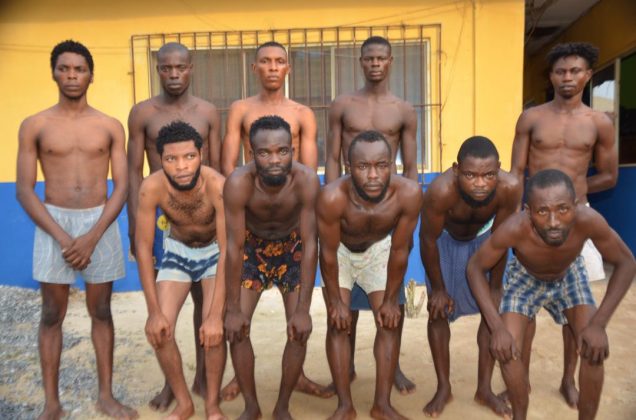 Operatives of the Anti-Kidnapping and Cyber-Crime Unit of the Edo State Police Command have arrested 10-member gang of armed robbers and cultists.

The Command’s image maker, SP Kontongs Bello, in a statement, disclosed that the suspects were arrested on August 4, 2021.

He said the Anti-Kidnapping and Cyber-Crime Unit, while on investigation activities at Uneme Eruna area of Edo state on August 4, in continuation of the case of the kidnap of an 11-year-old boy, one Onose Friday, kidnapped on July 19, responded swiftly to the distress call at about 0300hrs from one Aliu Zuberu, who alleged that three men, armed with dagger, robbed him of his money, while on his way to the community.

“The operatives succeeded in arresting the three gang suspects. The suspects, who are members of Eiye secret cult, were arrested while holding meeting with some of the cult members.”

“The ten suspects are presently in police custody and have also confessed to being a member of Eiye secret cult and robbery syndicate, who are terrorising the community,” Bello said.

He said items recovered from them are dagger, knife and two secret cult blue berets.

Bello said the community commended Edo State Commissioner of Police, CP Philip Aliyu Ogbadu, for restoring sanity and promise to pay him a thank you visit

Meanwhile, CP Ogbadu has commended the Commander of Anti-Kidnapping and Cyber-Crime Unit SP Richard Balogun, and his operatives, for the feat recorded.

Ogbadu who noted that members of the public had the responsibility to protect the less-privileged in the society, in order to avoid the menace of youths engaging in crimes, called on the general public to continue to cooperate with the police, especially in the area of information sharing.