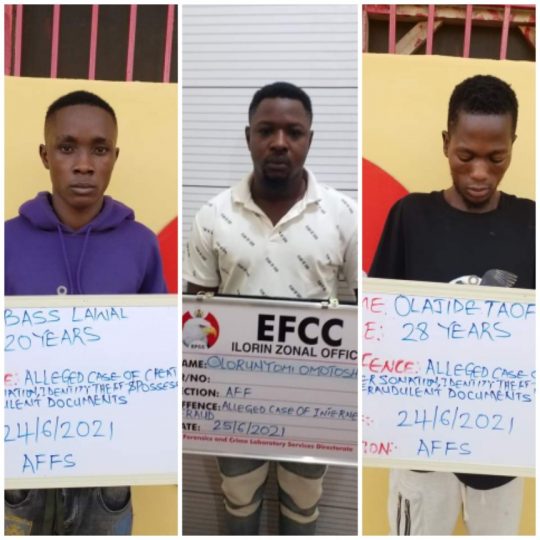 LAUTECH student, 2 others jailed for cybercrime

A Kwara State High Court sitting in Ilorin, on Friday, sentenced three persons – a University graduate, an undergraduate, and one other – to various jail terms for committing financial crimes.

The convicts included Omotosho Olorunyomi, a graduate of the Ladoke Akintola University of Technology, (LAUTECH) Ogbomosho, Abass Lawal, a student of the Kwara State University (KWASU), Molete, and one Olajide Adegoke.

The trio, who are to serve their jail terms at the Correctional Center, Ilorin, for offenses bordering on cybercrime, were, however, given options of fines, as appropriate.

The Ilorin Zonal office of the Economic and Financial Crimes Commission, (EFCC) secured the convictions on separate two count charges each.

The presiding judge, Justice Sikiru Oyinloye, while delivering judgment, said the court relied on the evidence of the prosecution, the guilty pleas entered by the defendants and the testimonies of the prosecution witnesses.

Oyinloye said the court was satisfied with the prosecution, who had proved their case beyond a reasonable doubt.

The Judge sentenced Omotosho to one-year imprisonment, on count one, and six months imprisonment on count two, with an option of N100,000 fine on each of the counts.

He ordered the forfeiture of $1,350 and the sum of N929, 389, domiciled in the convict’s Guaranty Trust Bank account, to the federal government.

The court also ordered the forfeiture of the Mac Book Laptop and iPhone 11 Promax, used to commit the crime, to the federal government.

Similarly, Oyinloye sentenced Lawal to one-year imprisonment on each of the two counts preferred against him, which would run concurrently, with an option of N50, 000 fine on each of the counts.

The court, thereafter, ordered the forfeiture of the iPhone 11 Promax, used in committing the crime, to the federal government.

The judge also ordered the forfeiture of a N300,000 bank draft, which the convict raised as restitution, and the iPhone used to perpetrate the crime, to the federal government.

In evaluating Olajide’s case, the Judge described him as “a serial liar, who had the intention of misleading the court by claiming innocence to the second count of the charge, despite the overwhelming evidence that the said money was a proceed of an unlawful act.”