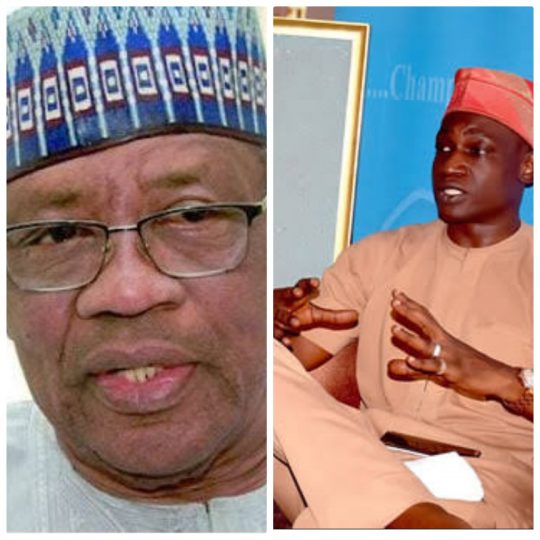 Abdul Abiola, a son of the acclaimed winner of the June 12, 1993, presidential election, Chief Moshood Abiola, said Ibrahim Badamasi Babangida annulled the election because he was scared to lose power.

Abdul made this known in an interview with Punch while reacting to the claims by Babangida that his annulment of the historic poll prevented a violent coup.

“It’s a kind of funny claim since after the annulment, there was still a coup. So, I don’t understand what he is talking about when the same thing that he was supposedly worried would happen still happened. It’s very funny. Anyway, let me start by saying this: most people might not know, but my name is Abdul Abiola and when I was born on December 18, 1984, my godfather happened to be Babangida himself. Apparently, when I was born, there was a big party at the house (in Lagos); we had about three bands. Even when he spoke about the ideal candidate, he was basically talking about Abiola. I just find it very odd that a person knows that the country needs somebody who is accepted across the country, and yet, this person found it hard to hand over to my father because my father was accepted across the nation. That is my take on the aspect of who should be the next president.

“I also want to say that I do not believe that the people who put us in the present situation we are in today in Nigeria should even be providing any solutions. The fact that he is not languishing in prison for the damage he has caused to the nation should be enough for him to just be quiet, as far as I’m concerned. What we lost in 1993 was the basis of a nation, that was the breaking point. When you want to create something that is beyond ethnic and religious divisions, that was the birth of the nation that he destroyed. So, for him to now say there would have been a coup if he didn’t do what he did, I would say for a fact that there wouldn’t have been a coup, what would have happened is he would have lost his own power and hold on the nation as we have it today. And I think that was what was scaring him, that he would lose power.

“They say power corrupts, and everybody knows that. He never wanted to lose power. He never expected Abiola to win, and the fact that Abiola did win, he then thought that his legacy would be that he handed over to a Yoruba person, so he, as far as I’m concerned, is the one who is ethnically biased because Abiola did not care if he was Yoruba or Igbo, he didn’t even think about such things. He was Nigerian first.”

Abiola was further asked if he thinks Babangida still has political influence today. He said:

“I will tell you for a fact that, ever since he left power, he has remained in the corridors (of power), tweaking and moving things around. I don’t understand why people just think that when you do the same thing over and over again, you will get a different result. That is the recipe for madness. So, in my submission, I will say this: Like I said, he was my godfather and I give him all the respect because even when my father was being herded to jail, he said, ‘Babangida is my friend,’ because my father knew that ‘what you’re doing is not going to end well.’ And I think people are seeing the lies in what he is saying now.

“He talked about the Structural Adjustment Programme, everybody knows that it was a strategic programme by the International Monetary Fund and the World Bank to subjugate Africa. But maybe when you are at the top of the pyramid, you don’t see all these things. Remember that before SAP, we had the Import Substitution Strategy, where we would stop importing certain goods because we could make them here, indirectly creating our own industries and that was going to build our own capacity. That, I believe, was even a better way because Nigeria was moving up during that time.

“When he talks about corruption during his time when he got in, it was N1 to $1. If you’re talking about corruption, stealing is stealing. These people want to destroy this country. I would urge my Nigerian people because we’re the youths; this man is talking about a time that has passed. As a matter of fact, if COVID-19 will do something good for us, it would be to address some of the issues we are facing in Nigeria.”

Babangida had on Friday disclosed that some unnamed 2023 presidential contenders were on his radar.

However, Abdul Abiola believes men like Babangida should never be trusted again.

“Let me tell you this for a fact if we allow them (political elite) to decide who will become president in 2023, we are going to be in the same position, if not worse. As a matter of fact, there might be no country to talk about anymore. When I watched his programme, first of all, I was amazed that this is the person that we are calling Maradona. He even used his own mouth to say he had to do a ‘Maradonic handling of society.’ This is why we are in the position we are today. People that should not be listened to at all are the ones making decisions for us, it’s a big problem. I believe the Nigerian people are smarter now than they were in 1993, they will not be bamboozled by any Maradona that doesn’t understand what being a Maradona is.

“I believe that if he had taken a stance in 1993, when he was being approached by some of our so-called elite, to annul the election and forego this democratic idea; if he could have just captured those dissenting voices that did not want problems for the Nigerian people and just wanted their own personal progress, his name would have been written in gold.

“But for as long as I am alive, I will make sure that enough people understand that the greatest problem we have in this country is the five babas that are on hilltops. We know where the hilltops are. Anybody that I see that goes to meet them on any of those hilltops for their permission to be president, I have already written those people off because those people have shown that they are not with the Nigerian masses, but they are with a select few who have ruined the nation and they feel they have the right to continue to ruin what we are trying to build.

“The Nigeria of today is not the Nigeria of 1993. We are not doing well, but you can see that we are using 97 percent of our income to service debts. We cannot continue this way. For the past 30 years, we listened to them diligently when they came to us to request our votes, but nothing came out of it. I urge Nigerians if it’s only this one time you take my advice, to shun anything you hear from these five babas. Enough is enough!