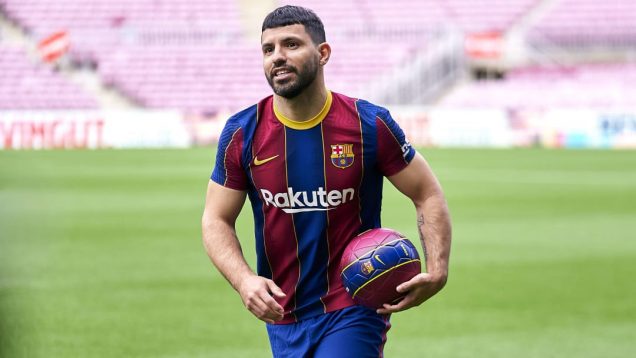 Koeman said the ex-Manchester City striker will be pivotal to the team next season.

However, the striker will have to wait until November to make his Barcelona debut after it was confirmed he has injured his calf.

The Argentine, who joined as a free agent from Manchester City this summer, suffered the injury in the build-up to Barcelona’s pre-season friendly against Juventus.

Initially, he was expected to miss just three or four weeks.

But the latest tests on his injury have revealed a tendon problem which will likely take up to ten weeks to heal properly.

Manager, Ronald Koeman dispelled rumors of the Argentine’s exit stressing how important Aguero will be to the team over the coming season.

“It is a lie that Aguero wants to leave,” Koeman told TV3. “He has signed with Barça and is very excited, he said.

Barcelona will play 12 La Liga games before November, including an away trip to Atletico Madrid on October 3 and a visit from Real Madrid a few weeks later.

While there is a chance Aguero could be back for the Real Madrid clash, it seems unlikely.