Enugu Centenary City: HURIWA advised to desist from interfering in a court case 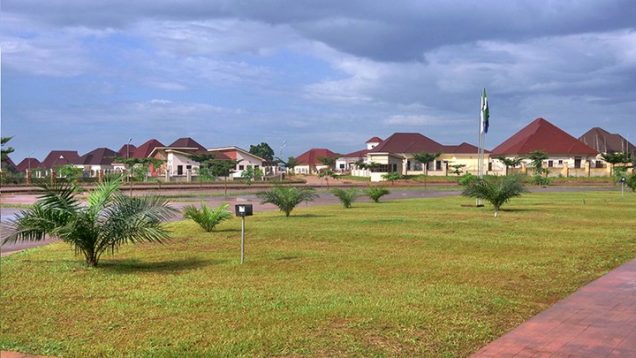 Enugu Centenary City: HURIWA advised to desist from interfering in a court case

Human Rights Writers Association of Nigeria (HURIWA) has been advised to forthwith desist from activities that amounted to alleged interference with the course of administration of Justice over Enugu Centenary City land matter still in court.

Responding to an online publication made on 8th august 2021 which was titled “police operatives being used by land grabbers” a publication that was made by HURIWA, this warning was contained in a statement issued Thursday by Private Estate International West Africa Limited (PEIWA) through its lawyer, Dr. J. Y. Musa SAN.

HURIWA through its members, Comrade Emmanuel Onwubiko and Zainab Yusuf had organized a press conference which resulted in the said online publication.

Part of the statement issued by PEIWA through its lawyer and made available to the press read, “In a press conference in Abuja at the weekend, the National Coordinator Comrade Onwubiko and National Media Affairs Director Miss Zainab Yusuf, both of HURIWA specifically called on the IGP to call to order a Deputy Inspector General of Police, DIG, who is being accused of misdirection and misusing SWAT to try to allegedly assist so-called “land grabbers”.

PEIWA noted that the press conference by the HURIWA as an association can be perceived as interference with the course of administration of justice as the publication emanating from the press conference reportedly received ubiquitous distribution across the print and electronic media in the country, saying that a section of the report by HURIWA is capable of misleading the reading public.

It stated that “based on the above comments, your organization, without attempting to independently verify or ascertain the veracity or falsity of the claims made by the faceless purveyors of the purported Petition, is credited with ‘lamenting’ the “purchase of police operatives by land grabbers” and proceeded to urge the IGP to investigate the allegation of purported human rights abuses in respect thereof”

The statement went further to say that evidence available for public knowledge is to the effect that PEIWA has been identified as the beneficial owner of 1,097.128 hectares of land at Obeagu/Amechi Awkunanaw, Enugu Local Government, Enugu State as against the claims made to the office of the Inspector General of Police by certain persons.

“Our client is the beneficial owner of 1,097.128 hectares of land at Obeagu/Amechi Awkunanaw, Enugu Local Government, Enugu State (“Enugu Centenary City”) covered by a Building Certificate of Occupancy with File No.: LEN/28425 and Survey Plan No. EN(A) 594.

“The said area of land in the Enugu Centenary City was allocated to our client by the Enugu State Government on 18th May 2009 under the New Township Development Agreement (“NTDA), vide a Building Certificate of Occupancy dated 10/11/2009 and duly registered as No. 20 at Page 20 in Volume 1622 in the Lands Registry, Enugu.

The statement noted that HURIWA’S intervention is sub judice, libelous, and replete with falsehood

“without prejudice to the above background, it is our considered view that HURIWA’s Press Conference alluded to in the above publication wholly consists of falsehood and attempts to re-invent facts, to the benefit of notorious criminals and their accomplices.

“In the first place, the press conference conducted by your organization indicates that the Enugu State Government purportedly revoked the Certificate of Occupancy issued to our client, PEIWA in respect of the Centenary City land on account of certain forgeries that came to light. This position is evidently contrived and concocted, as it does not represent the position of the Enugu State Government itself in any of its correspondences with our client or any process filed in any of the matters currently pending in the various Courts.

“The court documents are in the public domain and are open to verification by any interested party. Furthermore, neither our client nor any of its officers has been charged with the offense of forgery in connection with the Enugu Centenary City land. Our informed view is that your organization’s allusion to forgery in its press conference is the latest installment in a string of attempts to misrepresent the facts and obfuscate the true issues.

“As a self-described human right and civil advocacy group, it behooves your organization to ensure that it obtains the proper facts so as to offer fair and lawful commentary, within the limits of what is allowed in law. To this end, a responsible organization ought to have made efforts to obtain a balanced view of the entire circumstances of this matter by interviewing or seeking the views of our client, the DIG FCIID denigrated in its press conference or by obtaining relevant court documents which are easily-accessible public documents.

“It is therefore clear that HURIWA’s intervention by way of the aforesaid Press Conference and the accompanying publication is, at the very least, an attempt to interfere with and/or obstruct the due administration of justice. As a purported human rights body, the importance of refraining from interference in matters that are sub judice cannot possibly be lost on you.

“The Courts have consistently warned all persons to desist from commenting or otherwise interfering with matters that are the subjects of pending judicial processes, at the risk of committal for contempt- see the case of BELLO & ORS v. AG LAGOS STATE & ORS (2006) LPELR-7585(CA

“In the final analysis, our client is of the considered view that your press conference and the publication of same constitute actionable falsehood, for which redress may be sought at the appropriate judicial fora under the laws of defamation against your organization corporately and against Comrade Emmanuel Onwubiko and Ms. Zainab Yusuf personally.

“You are also advised to henceforth desist from taking any further step in the aforesaid matters or conducting itself in any manner as may embroil your organization is time-consuming, costly and very public litigation” it ended.