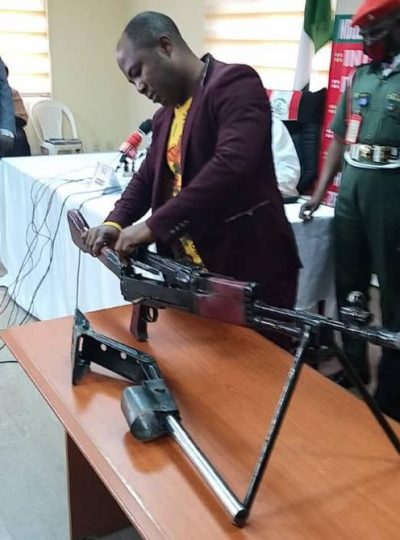 The National Drug Law Enforcement Agency, NDLEA, has arrested a heavy weapon manufacturer, Celestine Chidiebere Christian who had in his possession a high calibre G3 rifle.

He was also arrested with seventy-eight (78) rounds of life ammunition (RLA) of 7.62mm calibre and five empty shells of same in Benue while trying to move the heavy weapon and ammunition to Jos, Plateau state.

A statement issued by NDLEA‘s spokesman, Femi Babafemi on Thursday said Chairman of the agency, Buba Marwa while reacting to Christian’s transfer to the NDLEA headquarters in Abuja said “from the briefs given by the Benue state command, the suspect was arrested on Wednesday, 4th August 2021 at exactly 6:30 am, in a bus belonging to CHI-Boy Transport Company, en route Onitsha to Jos when the vehicle was flagged down at Aliade check-point for search.

“In the process, an iron box completely welded end to end was found in the vehicle, and when the passengers were questioned to know the owner, the suspect, accepted ownership.

“When the steel box was taken to the State Command headquarters along with the suspect, an electric filing machine was used to cut it open a fabricated high calibre G3 rifle along with seventy-eight (78) rounds of life ammunition (RLA) of 7.62mm calibre and five empty shells of same were discovered inside.

“However, I asked that Celestine Chidiebere Christian be transferred to Abuja because of the calibre of weapon found with him, which he claims he manufactures.”

The NDLEA Chairman commended the Benue State Command for their vigilance and unrelenting commitment to the mandate given the agency by President Muhammadu Buhari to rid the country of illicit substances and ultimately secure the nation from the activities of criminal gangs.