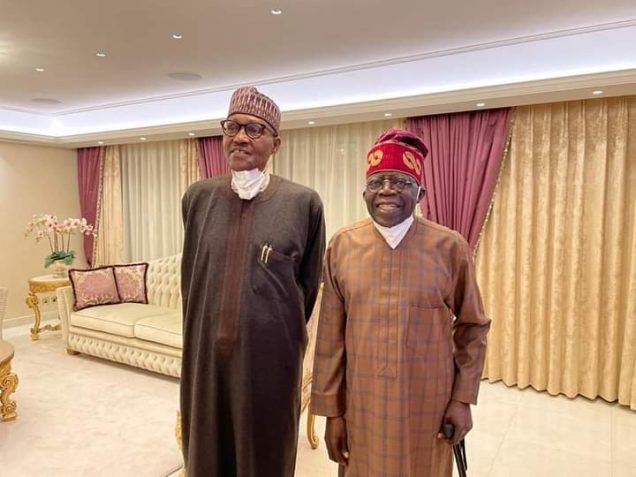 All Progress Congress National leader, Bola Tinubu, has issued a statement over President Muhammadu Buhari’s visit to his apartment in London.

The APC national leader, in a statement signed by his Media Adviser Tunde Rahman, thanked the president for visiting him.

Tinubu noted that President Buhari demonstrated personal thoughtfulness and humility to visit him.

“All Progressives Congress national stalwart, Asiwaju Bola Tinubu, has expressed thanks to President Muhammadu Buhari for visiting him in London on 12 August, the statement read.

“The visit was a friendly and welcome one that underscored the considerate and caring personality of our nation’s President and Commander-in-Chief.

“By this gesture, Mr. President has, again, demonstrated his personal thoughtfulness and humility; defying the erroneous commentaries peddled by his critics.”

President Buhari’s visit to Tinubu in London on Thursday had generated many talking points.

Some commentators said it was because the former Governor of Lagos state was ill as widely speculated while others said the visit was a scheme towards 2023 Presidency.

However, both claims have been rubbished by Mr Rahman and presidential spokesman Femi Adesina.

Rahman noted that Tinubu had no medical problem that would require hospitalization.

Femi Adesina, on his part, said the visit was “all about goodwill and best wishes.”