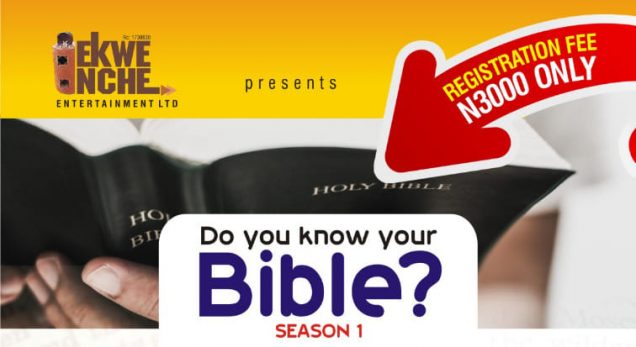 The show organised by Ekwe Nche Entertainment will kick off with an audition on Sept. 11 at Alabi Street in Ikeja.

Church leaders, who spoke with NAN in separate interviews in Lagos, said the show is a germane idea.

Founder of Spoken Word Revival Ministry, Pastor Chris Nmaezie, said it would aid in curbing immorality among the youth.

Nmaezie, whose ministry focuses on youth renaissance and spiritual reform, said it would complement the efforts of the church.

“Unlike other TV reality shows that focus on worldly things, Bible culture and teachings tailored through entertainment will be easily internalised by younger ones as a way of life.

“With the increase in deviant and cruel crimes involving the youth, it is pertinent we change certain things in order to get different but conventionally acceptable results,” he said.

Rev. Bartholomew Etuk, a Senior Evangelist with the Gate Builders Mission Outreach, said that he is in support of the show.

Etuk, whose organisation preaches the gospel to the Chinese community in Nigeria, urged that the show should be good news- oriented.

“The management of the show should not dilute the message for any reason, to permeate the target audience.

“As a people we must find a way to refocus the mindset of our young ones away from things that do not glorify God.

“The undoing of the society that seems to be hurting us is keeping mute in the face of atrocities,” he said.

Also speaking on the proposed show, Pastor Adeola Oyedeji of the Winners Chapel said that it was a welcome development in Christendom.

Oyedeji, who expressed dismay about some television shows that lacked social redeeming values, commended the originators of the Bible quiz for the initiative.