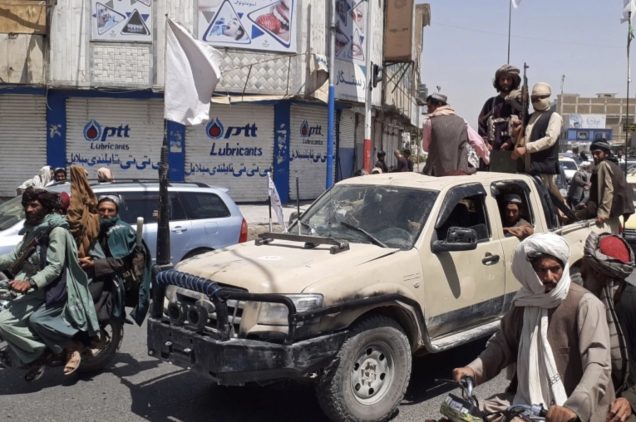 Taliban fighters pushed closer to Kabul, the Afghan capital on Saturday, after capturing Pul-e-Alam , 70 km away.

Pul-e-Alam is the = capital of Logar province.

The Taliban did not face much resistance, a local official said.

Spokesman of the Taliban, Zabihullah Mujahid said the group has also captured Sharana, the capital of the southeastern province of Paktika.

In a tweet, Mujahid said the building of the governor, the police headquarters, and other public buildings were under the control of the Islamist movement.

He also said the militants seized the armament of the government troops who switched sides.

According to reports, the Taliban also launched a multi-pronged assault on Saturday on Mazar-i-Sharif, a major city in northern Afghanistan.

So far, the fighters have captured much of northern, western and southern Afghanistan in blitzkrieg military operation.

This is less than three weeks before the United States and NATO allies are set to withdraw their troops.

The gain of Pul-e-Alam, a key staging post for a potential assault on Kabul, comes a day after the insurgents took Herat and Kandahar, the second- and third-biggest cities.

A U.S. defence official said before the fall of Pul-e-Alam that there was concern that the Taliban could make a move on Kabul within days and not months as initially envisaged.

The Pentagon has said two battalions of Marines and one infantry battalion will arrive in Kabul by Sunday evening, involving about 3,000 troops.

“They have arrived, their arrival will continue ’til tomorrow,” the U.S. official told Reuters on condition of anonymity.

An infantry brigade combat team will also move out of Fort Bragg, North Carolina, to Kuwait to act as a quick reaction force for security in Kabul if needed, the Pentagon has said.

Britain and several other Western nations are also sending troops as resistance from Afghan government forces crumbles and fears grow that an assault on Kabul could be just days away.

An Afghan government official confirmed on Friday that Kandahar, the economic hub of the south, was under Taliban control as U.S.-led international forces complete their withdrawal after 20 years of war.

Herat in the west, near the border with Iran, also fell to the Islamist group.

Kandahar’s loss was a heavy blow to the government.

It is the heartland of the Taliban – ethnic Pashtun fighters who emerged in 1994 amid the chaos of civil war.

Kandahar is close to the town of Spin Boldak, one of the two main entry points into Pakistan and a major source of tax revenues.

The U.S. ousted the Taliban from power in 2001 after the Sept. 11 attacks on the United States.