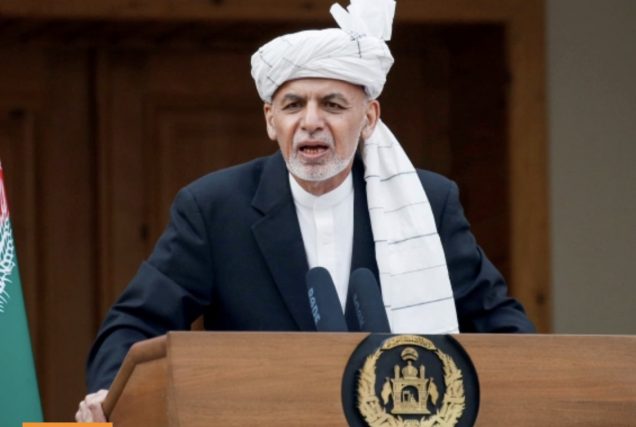 According to reports, Ghani had fled to Tajikistan, capping the militants’ lightning push for power.

His absence from Kabul was suspected Saturday when he gave a pre-recorded rally-the-forces broadcast.

But the speech was of little value as the Taliban mounted a blitzkrieg campaign taking city after city, often without resistance.

Before news that Ghani had left Kabul, a palace official said he was in emergency talks with U.S. peace envoy Zalmay Khalilzad and officials from the NATO transatlantic alliance.

A representative of the Taliban said the group was checking on Ghani’s whereabouts.

But there were no reports of fighting and the group’s spokesman Zabihullah Mujahid said they were waiting on the outskirts and were in talks with the Western-backed government for a peaceful surrender.

“Taliban fighters are to be on standby on all entrances of Kabul until a peaceful and satisfactory transfer of power is agreed,” he said.

Representatives from the two sides were due to meet in Qatar on Sunday, Fawzi Koofi, a member of the Kabul negotiating team, told Reuters.

A source familiar with the matter said they would discuss a transition of power and U.S. officials would also be involved.

Known during their past rule for keeping girls out of school and hardline Islamic punishments such as amputation, stoning and hanging, the Taliban appeared to be trying to project a more modern face.

Another spokesman Suhail Shaheen said the group would protect the rights of women, as well as freedoms for media workers and diplomats.

“We assure the people, particularly in the city of Kabul, that their properties, their lives are safe,” Shaheen told the BBC, saying a transfer of power was expected in days.

The ease of the Taliban’s advance, despite billions of dollars spent by the United States and others to build up local Afghan government forces, has stunned the world.

The prediction was widely off the mark.