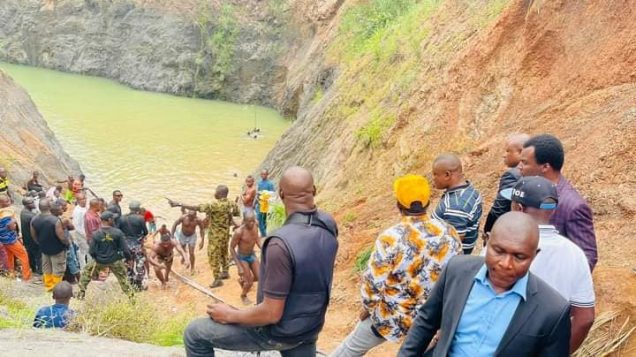 The mining pit where a bus plunged on Saturday

Governor Dave Umahi of Ebonyi has officially announced the death of the All Progressive Congress (APC) Youth Leader in the state, Mr Ogochukwu Elem.

Umahi also confirmed on Monday that Elem died along with two police operatives.

He said the deceased persons were attending a function, when their vehicle plunged into an unreclaimed mining pit at Enyigba, near Abakaliki.

He spoke at the scene of the accident, when he led some top government officials and the Commissioner of Police, Mr Aliyu Garba, to supervise the evacuation of the vehicle and remains of the occupants by local divers.

The News Agency of Nigeria (NAN) reports that the accident occurred on Saturday that efforts made by sympathisers to evacuate the vehicle and the occupants failed.

The governor described the accident as “mysterious”.

He commiserated with the APC, the Nigerian Police Force and bereaved families and their relations.

He said: “The victims were attending a function but we do not know the cause of the plunge which could not be stopped by the barricades around the pit dug since 20 years ago,” he said.

“We pray God to judge the victims fairly and commend all those who worked since Saturday, Aug.14 to ensure a successful evacuation.”

According to him, the pit is more than 20 meters deep from the road level.

He said that government had waged war against miners, who would excavate lands for mining purposes without reclaiming them thereafter.

“My Chief of Staff, who doubles as the Commissioner for Solid Minerals, Chief Samuel Okoronkwo, should ensure the identification of all pits dug for mining purposes.

“We would identify those who dug the pits and commence their re-claiming by Aug. 23.

“Our roads are being destroyed by these miners who take our minerals away at night, aided by our people and some unscrupulous security agents.

“We would be tough on such actions subsequently as these miners explore our mineral resources but fail to remit proceeds to the people,” the governor said.

The commissioner of police confirmed that the dead police officers were serving under the state command.

“The accident was unfortunate and we would do everything possible to assist their families,” he said.