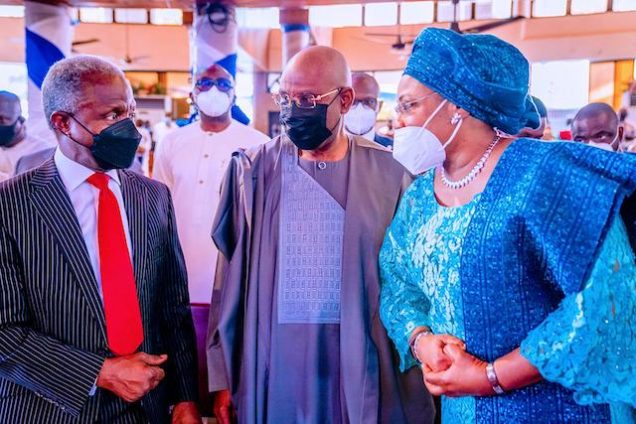 Osinbajo, left, with Dr Israel Akanji and his wife Victoria

Vice President Yemi Osinbajo said Nigeria will eventually overcome its security and socio-economic challenges as the Spirit of God is in the land.

Osinbajo’s spokesman, Laolu Akande, in a statement in Abuja, said the vice president spoke at the send off service for Rev. Israel Akanji on Sunday.

Akanji served as Senior Pastor and Minister in Charge of the First Baptist Church, Garki, Abuja, for 22 years. He is now the new President of the Nigerian Baptist Convention.

The President of the Christian Association of Nigeria (CAN), Rev. Olasupo Ayokunle, and the Minister of State for Health, Dr Olorunimbe Mamora, among other dignitaries and Christian leaders also attended the service.

Citing the first chapter in the Biblical Book of Genesis, Osinbajo related events surrounding the creation of the heaven and earth to the nation’s present challenges and the lives of great individuals.

“This is the way of the lives of some of the greatest men and women and also nations.

“There might be confusion, grief, trouble, darkness and fear. But even in that confusion, the Bible tells us that the Spirit of the Lord was hovering over the face of the deep. God was in the darkness, He did not run away, He is not asleep.

“So, it is with our nation; today, some things may seem bleak and grave, with insecurity, economic difficulties, but even in the midst of these problems, the Spirit of God is in this land, it is here, hovering over this nation.

“So, what happens next in verse three? We are told that suddenly God spoke, ‘let there be light…and there was light.’ The darkness came to an end, the fear, insecurity came to an end. So, it shall be for you and our nation.

“In the next verse, scripture says, God saw the light that it was good….so it shall be for you and our nation; the light will come and it shall be good, very good.”

Osinbajo also commended Akanji’s attributes as a humble and credible leader who had continued to forge pathways for peace and unity as an effective bridge builder between faiths and ethnicities, realisng that Christ died for all men, and that our gospel was the gospel of peace.

The vice president said that Akanji had also served the Body of Christ in Nigeria as the CAN Chairman of Federal Capital Territory, and was still serving as the CAN North Central Zone’s leader.

“In this long and arduous journey, Akanji has had by his side, his dear friend, partner and darling wife, Mrs Victoria Akanji, Mama Sunshine.

“She has been an effective part of the great works that God has done in her husband’s ministry.”

According to the vice president, Akanji’s practical demonstration of the gospel of the love of Christ is his recipe for conflict resolution.

He said that in the 22 years of serving as pastor of the First Baptist Church, Garki, the humble, humorous General of God had also become a foremost, credible and articulate ambassador of the Christian faith in Nigeria.

The vice president congratulated Akanji on the occasion of his 60th birthday coming up on Aug. 16.

He wished Akanji more strength, wisdom and favour and asked for God’s blessing on all Nigerians.