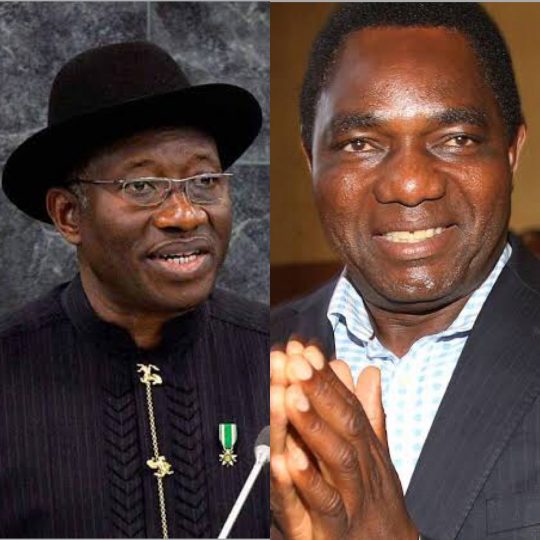 Former Nigerian President, Dr Goodluck Ebele Jonathan, has told Zambian President-elect, Hakainde Hichilema to be magnanimous and focus his attention on the provision of good governance for the development of Zambia and the welfare of your people.

He also congratulated Hichilema for his victory at the just concluded polls.

In a statement issued by his Media Adviser, Jonathan praised Hakainde Hichilema for his perseverance in the pursuit of his legitimate political aspiration.

The former president added that Hichilema’s victory in the wake of five failed attempts showed that the people’s trust in him was genuine and steadfast.

He commended the people of Zambia for trooping out massively to participate in the election as well as peacefully conducting themselves.

In the goodwill message to the President-elect, the former President wrote: “I write to sincerely congratulate you on your victory at the just concluded Presidential election in your country.

“That you won this election after five unsuccessful attempts is a clear testament to your tenacity, conviction, and commitment to contribute to the development of Zambia and the prosperity of her people.

“I recall that in your last contest for this position, you lost the election by a narrow margin. As the Head of the African Union Observer Mission, I was impressed by your show of patriotism and good conduct, during the 2016 elections.”

Furthermore, he urged Hichilema to “continue to be magnanimous and focus your attention on the provision of good governance for the development of Zambia and the welfare of your people.”

However, in a separate letter to President Lungu, Jonathan commended him for conducting the kind of credible elections that have put Zambia on the map of African nations where democracy has taken root.

“It is also a thing of pride and an enduring legacy to have conducted such a credible election that was won by the opposition, which is evidence of how fair and transparent the electoral process has become under your watch.

“You have, therefore, contributed immensely to the deepening of democracy not only in Zambia but also in Africa.”