Lagos charges intending retirees to prepare for life after retirement 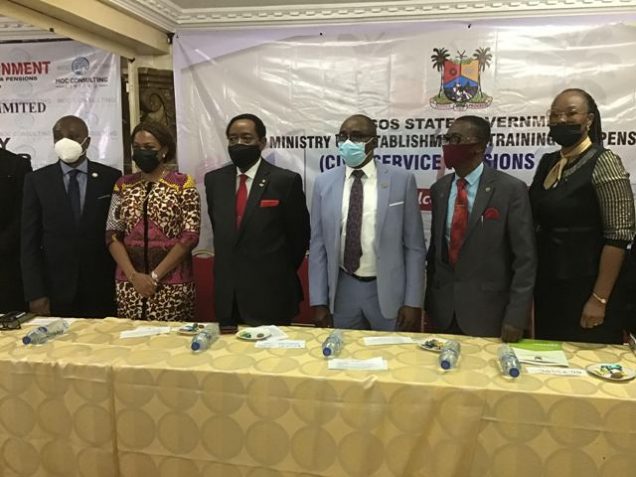 Commissioner for Establishments, Training and Pensions, Ajibola Ponnle and other top government functionaries at the event

The Lagos State Government on Tuesday charged intending retirees to prepare adequately for life after retirement in order to secure their future.

Commissioner for Establishments, Training and Pensions, Mrs Ajibola Ponnle gave the charge at the flag-off of three days Pre-retirement Workshop on ‘Entrepreneurial Life after Retirement,’ for intending retirees from the civil service, held in Ikeja, Lagos.

Ponnle said retirement is an event that happened to every officer that God blessed with long life, saying there was need for every staff to prepare for life after retirement even before the moment comes.

“So, this pre-retirement training is of paramount importance as it is designed for staff of the Lagos State Government that are about to exit from the State Civil Service. The essence is to ensure that you are well prepared to face the challenges of life after retirement and maintain an improved lifestyle even as senior citizens,” she said.

The commissioner stated that the essence of the workshop was to prepare participants before disengaging from paid employment and that in the course of the next three days, business ideas, investment opportunities and healthy living tips in retirement, among other topics of interest, would be discussed.

She urged the participants to listen, pay full attention so that they could get the best from the training.

Ponnle added that the Babajide Sanwo-Olu administration does not treat with levity, matters that concerned pensioners.

“As far as Mr Governor is concerned, it is of topmost priority as he is passionate and committed to the welfare of Retirees, thereby making Lagos State not only the most pension compliant in the country but also the State to beat.

“I want to encourage all participants here to fully participate in all the sessions and avail themselves of the opportunities.  There is no gainsaying the fact that this workshop would go a long way to ensure that they are equipped and empowered for the next phase of life,” she stated.

Permanent Secretary, Civil Service Pension Office, Dr. Olayiwole Onasanya, who was represented by Mr. Babalola Obilana said the essence of the training was to prepare the civil servants for life after service.

Lead Consultant, MOC Consulting Limited, Dr. Charles Oladimeji, said disengagement from work could sometimes disorganize workers, saying that the state government, realizing the importance of this, decided to equip its staff nearing retirement with the necessary tools to make their retirement worthwhile.

“MOC Consulting has designed the programme to prepare intending retirees for what lies ahead after retirement and the challenges,” he said, adding that the objective of the programme was that at the end of the training, participants would be able to appreciate life after paid employment, boost capacity for entrepreneurship, among others.

He said topics to be treated cut across nature and challenges of retirement; planning, the problems and fears; developing entrepreneurial spirit, developing business ideas and investments opportunities; pension reforms and benefits and healthcare after retirement.