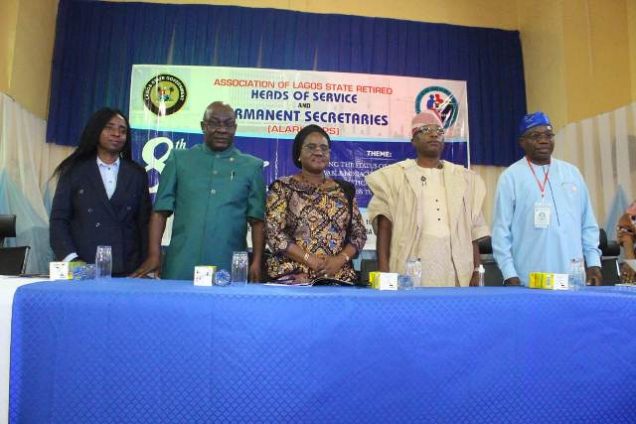 Olugbile, Ahmed, SSG Folashade Jaji and others at the ALARHOSPS summit in Lagos

Lagos State Governor, Babajide Sanwo-Olu on Tuesday said the state’s public service is the most progressive in the entire nation.

The governor, who was represented by the Commissioner for Local Government and Community Affairs, Dr. Wale Ahmed, said the reputation garnered by the civil service was due to the sacrifice and hardwork ALARHOSPS members had put in while they were in service.

He commended the association for its vision and commitment, which according to him has been the driving force that had sustained the summit as a platform for generating ideas and initiatives for the continued growth and development in the state.

Sanwo-Olu said in the past two years, his administration had remained focused and resolute in its approach and implementation of policies and procedures, saying that it planned to do more to enable the people and residents of Lagos State enjoy dividends of democracy

President, ALARHOSPS, Dr. Femi Olugbile reiterated the commitments of the association towards protection of the welfare of its members.

This, he said, was to pay back its members who have given so much in the service of society.

According to him, “ALARHOSPS has had among its defining objectives the protection of the welfare of its members who have given so much in the service of society.  Alongside that is an abiding interest in the optimal functioning and development of the Civil Service, to which all the members have devoted their best working years.”

Olugbile explained that in choosing the theme of the 8th Summit “Enhancing the Status of Lagos as a Resilient and Livable Megacity- with focus on Safety, Hygiene, Political and Economic Stability and Access to Goods and Services,” the association was persuaded by the great economic and developmental strides being taken by Sanwo-Olu and his government and thus urged all civil servants to reciprocate the kind gesture.

Speaking, Lagos State Head of Service, Mr Hakeem Muri-Okunola, who was represented by the Permanent Secretary in the Public Service Office, Mr. Samson Ajibade, said the theme of the summit could not be more appropriate as it offered yet another unique and veritable platform for the body to offer far reaching contributions to this administration’s agenda in transforming Lagos to an inclusive, safe, resilient and sustainable city.