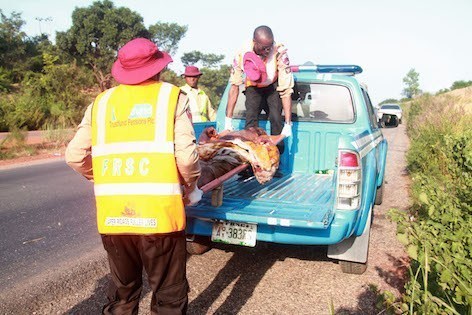 The police in Jigawa have confirmed the death of 14 persons in an auto crash in Ringim Local Government Area of the state.

Shiisu said the accident occurred on Monday at about 7:40 pm, along Ringim-Kano road.

He said eight other people were injured in the accident that occurred at Kwanar Gerawa area of Ringim LGA.

“On August 16, at about 1940hrs a fatal motor accident occured that involved a Golf-3 car with registration number BH 628 DKA driven by one Magaji Yakubu of Timbau village in Gezawa LGA of Kano State.

“Yakubu, who was heading to Ringim, had head on collision with another oncoming Golf-3 vehicle with registration number TRN 541 AA driven by one Usman Isyaku of Dausayi village, also in Gezawa.

“The accident occurred at Kwanar Gerawa and both vehicles were carrying passengers. As a result, 14 passengers, comprising seven males and seven females lost their lives,” Shiisu said.

According to him, the eight injured passengers are receiving treatment at General Hospital, Ringim.