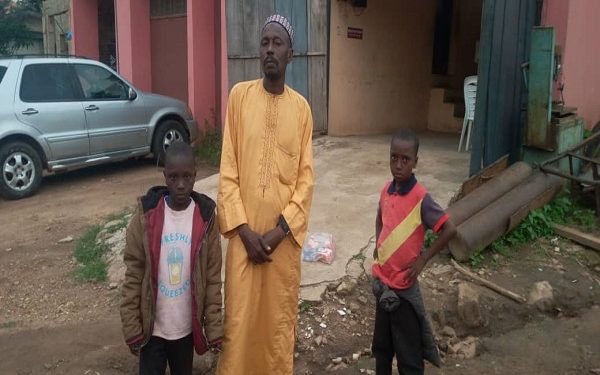 Two young herders and their father arrested by Amotekun in Ondo

The minors were arrested for threatening a 70 year-old woman Victoria Ajayi, with a cutlass around Kajola area of Akure South Local Government Area of Ondo state.

Victoria Ajayi said she was informed by her grandchild that cows were on their farm and upon going out, she saw the young herders and an adult afar.

The cows were already on her farm at that time as she watched them eat her vegetables and other crops.

She said she called on one of the young kids to call the older person.

They responded angrily, with one pointing a cutlass menacingly at her.

Mrs. Ajayi said she had flashes of renting a new house owing to frequent visits by herders and this time, they almost got aggressive.

According to her, after she fled her house she went to Amotekun’s office to get help.

The minors 52-year-old father, Musa said it was a mistake.

Musa who said he is from Katsina State said he has been in Akure for 30 years and he has not gotten into trouble with anyone.

He said he was not around when the incident occurred and it was his little boys who are being trained to become herders that misbehaved.

The 52-year-old explained that the little boys go out with the older one to train and he was Sabo when the incident occurred.

Adetunji Adeleye, Amotekun commander in Ondo said his men responded to a distress call and they saw the cows ravaging the farm.

He noted that they saw the two underage herders also.

The boys were arrested so that their father could show up.

Adeleye said the kids would be charged to a juvenile court to face the law.