Jerhonda Pace: What R. Kelly did to me, T-shirt of semen tendered in court 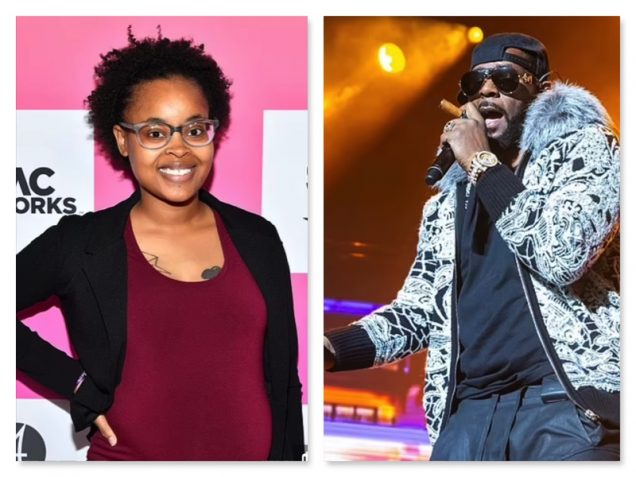 Jerhonda Pace abused by R. Kelly when she was 16

Jerhonda Pace, one of the underage girls sexually abused by R&B star, R.Kelly has told a Brooklyn court the lurid details of her experience in the hands of a star, called a predator by the prosecutor.

Pace, who first took the witness stand on Wednesday, continued her testimony today, tendering a semen soaked blue T-shirt with the DNA of Kelly.

She said she first met Kelly aged just 14 when she attended every day of his 2008 child pornography trial – in which he was found not guilty due to lack of sufficient evidence.

She said she then met up with Kelly at a party two years later when she was 16 and he was 42.

Kelly then allegedly invited her to his mansion a few days later and told her to put on her swimsuit and disrobe in front of him.

When the two began kissing and he performed oral sex on her, she told the court she ‘felt uncomfortable’ lying about her age and told him she was actually 16 and showed him her state ID.

Kelly allegedly responded ‘What is that supposed to mean?’ and urged her to keep saying she was 19 and ‘act 21’.

They began a sexual relationship.

Over the next six months, Kelly forced her to follow his ‘rules’, took away her cell phone, denied her food or using the bathroom without his permission, and made her call him ‘daddy’, she told the court Wednesday.

Kelly was allegedly happy she was a virgin, telling her ‘that’s good’ and said he ‘was going to train me on how to please him sexually,’ she testified.

Pace said she continued to see and have sex with Kelly over the next six months, with Kelly often filming their encounters.

Pace told jurors she last saw Kelly in 2010 when he spit on her, slapped her and choked her until she passed out.

She said she was beaten because she was distracted and didn’t immediately acknowledge Kelly’s presence when he entered.

So he slapped her and choked her until she passed out.

When she came around, he allegedly made her perform oral sex on him and he ejaculated on her face.

The court was shown the blue t-shirt that Pace said she used to wipe Kelly’s semen off her face following the encounter. The prosecution said it contained his DNA.

Pace said she was forced to sign a nondisclosure agreement, and a letter full of false admissions that claimed she had stolen money and jewelry from him, which prosecutors allege was a form of blackmail by Kelly.

Before Pace took the stand on Wednesday, the defense and prosecution gave their opening statements kicking off the trial that is expected to last around a month.

Prosecutors described the 54-year-old as a ‘predator’ who used ‘every trick in the predator handbook’ to groom his victims, blackmailed them with sex tapes and violently beat them if they failed to comply with his demands.

However, Kelly’s attorney instead claimed that Kelly was the victim of ‘fans’ who wanted the ‘notoriety of being with a superstar’ and sought to discredit the accusers, telling jurors they will have to wade through ‘a mess of lies’.

In the prosecution’s opening statements, Assistant US Attorney Maria Cruz Melendez told the jury Kelly used ‘every trick in the predator handbook’ to groom his victims, blackmailed them with sex tapes and violently beat them if they failed to comply with his demands.

The prosecutor said Kelly lured in children and women by inviting them to join him after shows with backstage passes then ‘dominated and controlled them physically, sexually and psychologically.’

Kelly allegedly made his victims create sex tapes that he then used to blackmail them into silence and would punish his victims with ‘violent spankings and beatings’ if they didn’t do what he demanded of them.

However, Kelly’s defense instead claimed he was the victim of ‘fans’ who wanted the ‘notoriety of being with a superstar’ and had enjoyed ‘beautiful’, consensual relationships with him and were now turning on him.

Attorney Nicole Blank Becker accused the alleged victims of lying, warning jurors they’ll have to sort through ‘a mess of lies’ from women with an agenda.

‘We believe their testimony will crumble,’ Becker told jurors.

‘There will be so many untruths told to you, ladies and gentlemen, that even the government won’t be able to untangle the mess of lies.’

Kelly’s attorneys had argued herpes is not life-threatening so Kelly shouldn’t be charged with passing it to a minor.

They specifically argued the herpes exposure charge should be dropped because herpes is a virus and not ‘an acute, bacterial venereal disease such as syphilis or gonorrhea.’

They also argued that racketeering charges should be dismissed because they said they fell outside the five-year statute of limitations.

The judge denied the request to dismiss the case early Wednesday.

She also ruled on other motions, including granting prosecutors permission to include evidence they claim shows sexual abuse by the star back in 1991 and which relates to the charges over his marriage to Aaliyah.