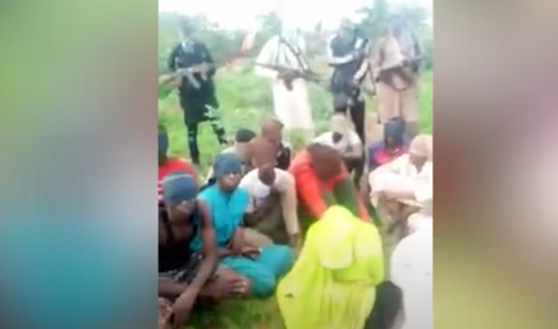 The abducted students of the College of Agriculture and Animal Sciences, Bakura in Zamfara State have begged Governor Bello Matawalle to pay the ransom demanded by their abductors.

The students, in a 30-second video clip that surfaced online on Wednesday, said the ransom must be paid within 24 hours to avert more troubles.

In the video, the students and some of the female staff were seen squatting and blindfolded with the heavily armed men surrounding them.

One of the students, who spoke in Hausa, said:

“We are the students of the College of Agriculture and Animal Science, Bakura that were abducted by the bandits.

“You can see the conditions we are in. They are threatening to kill us if the government does not produce the ransom in 24 hours. The bandits even took us to see the dead bodies of those they have killed.”

However, the Commissioner for Information in Zamafar, Ibrahim Dosara, has reacted to the video.

He told Channels Television that the state government would do everything possible to secure the release of the abducted students and staff of the college.

He explained that a joint team of security agencies have begun a search and rescue operation.

A total of 20 people comprising 15 students, four staff, and a driver were abducted on Sunday night when bandits stormed the school.

During the attack, two watchmen and a police officer were killed.

Two days after the incident, the abductors demanded a ransom of N350 million before they would release their victims.