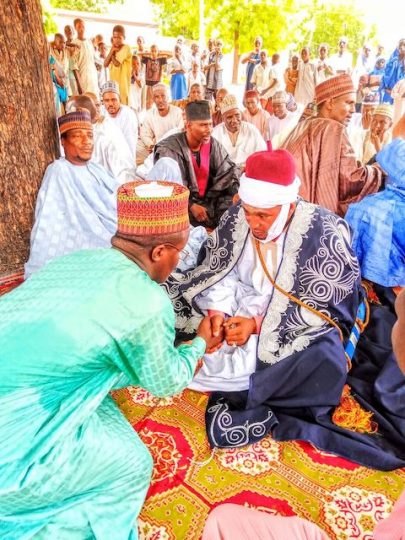 The Sultan of Shuwa Arabs of Edo State, Adam Harun installed in Maiduguri

The Benin Traditional Council and the Edo government have condemned the planned coronation on Saturday of Idris Adanno as the Sultan of Shuwa Arabs of Edo State.

And the owner of the Rialto Hotel, the advertised venue of the so-called coronation has slammed his doors shut.

The reactions came as a spokesman of the Shuwa Arabs community walked back on the plan and said the title of “Sultan’ was a printers devil.

He said what they planned to do was instal a ‘Seriki”, a chief.

His clarification only showed the division in the community because on 4 August, the Shehu of Borno gave the mandate of leadership, to Adam Harun, who is not the same as Idriss Adanno.

Shuwa is a tribe domiciled in Borno Emirate. Their people are however found across the length and breath of the country.

Invitation card to the purported coronation was first sighted on Facebook.

According to the invitation, the event was to hold on Saturday, 21st August, at Rialto Hotel, located in Eyaen, a surbub of Benin City.

The planned coronation has generated tension among prominent Benin citizens, who reasoned that there could not be two kings in Benin Kingdom.

However, the Shuwa Arabs in the state are themselves divided, with a faction backing the older Sultan and some backing Idriss Adanno.

When confronted with the turbaning of Harun by the Shehu of Borno, one Isa Masser, who identified himself as one of Idriss Adanno’s cabinet members, denied knowledge of Harun and his turbaning.

Masser who blamed the printer’s devil for the appearance of Sultan of Shuwa in the invitation card, said that Adanno was to be installed ‘Seriki’ [leader] of his people, and not as Sultan of Shuwa of Edo State.

“It is not true, it’s just a false allegation. Idriss Adanno was only chosen as the head of his people. So, they are about to organize a small party for that, but, the printer mistakenly put Sultan and Coronation, which is not supposed to be there.

Masser who said Shuwa people have lived in Edo State for over 50 years, admitted that there is division among them.

“There are Shuwa people in Edo State for over 50 years. There are few of the people with Harun, but the majority of the people are with Seriki Idris Adanno.

“You know one thing, this is Edo State. In everything, we must be under the government of Edo State and there is also an Oba here in Edo State, so, you cannot go to other states for another king to crown you or turban you and you come back here. As he comes back here to Edo State and he wants to rule, it’s not done,” said.

He also claimed that “Idris Adanno is already recognized by the Oba of Benin,” a claim denied by the Kingdom.

The Secretary to the Benin Traditional Council (BTC), Mr. Frank Irabor, told our correspondent on phone that Idriss Adanno is neither known to the Palace nor recognized as any title holder.

“No, no, no, we are not aware of Idriss Adanno, that is not correct.

“From what I gathered, there is another person contesting that position with him. You should ask this Adanno, where he derive his own authority from.”

“The summary of it is this: their authority is derived from the traditional ruler of their ethnic stock.

“In this case, it is the Shehu of Borno that normally appoints them and write to the Oba of Benin, that this person has been appointed by me, to be the leader of so, or so people in your kingdom, please accord them the recognition. Once we see that letter, the people will come and see His Majesty. Once they have seen His Majesty, they can go and do their turbaning any time they feel like.

“But when two people are contending for the post, then, nothing must take place.

“Let me give you an example of the one of Nupe people, where they had two people contending for it, both of them came before the Oba and the Oba sent word to Etsu Nupe. Fortunately, Etsu Nupe came down to Benin and His Majesty raised the issue before him and the two contending persons came before him. The Etsu Nupe right there pointed to the one he appointed. The other one could not present any letter of appointment.

“So, if this one [Adanno] has a letter from the Borno Emirate Council, let him bring it to the Palace. In the meantime, we are already making arrangements to ensure that no one purportedly installs himself. What we know is Seriki. There is nothing like Sultan and there is nothing like coronation. The only coronation we have is the coronation of the Oba of Benin.

“The basic thing there is that, our position is that that event should not take place, because it has generated a lot of controversy and could probably lead to tension and insecurity and we don’t want that at all,” Irabor said.

When asked if Adam Harun who was turbaned by the Shehu of Borno has presented himself at the Benin Palace, the BTC spokesman said:

“I don’t know if he has come, I’ve not seen him. But I gathered that he was supposed to be in the Palace today.”

Meanwhile, Edo State Government has condemned, in strong terms, the planned coronation of Idriss Addano as the ‘Sultan of Shuwa Arabs of Edo State’.

The government described the purported move as sacrilegious and a threat to peace and security in the state.

This is even as the owner of Rialto Hotel, the venue of the ceremony, HRH Osazuwa Iduriase, denied knowledge of the purported coronation ceremony.

The Secretary to the State Government, Osarodion Ogie, Esq., in a statement, assured that firm and decisive action will be taken to prevent the actualisation of the “illegal and sacrilegious act.”

“The Edo State Government has been inundated with complaints from indigenes and residents of the state over the purported move to embark on the coronation of one Idriss Addano as ‘Sultan of Shuwa Arab of Edo State’.

“The Edo State Government wishes to state as follows: That whether or not this event is held at the said, or any other location within the state, it would constitute a direct assault on the traditions, custom and culture of the people of Edo State, by individuals who clearly have sinister motives and are trying to abuse the well-known Edo hospitality by their act of sacrilege.

“That it is a potential threat to the peace and security of Edo State, with the capacity to cause a breakdown of law and order as citizens of the state are likely to be provoked by the obnoxious ceremony.

“Under the Edo State Traditional Rulers and Chiefs Law, it is an offence for anyone to proclaim himself, or allow himself to be proclaimed as the holder of any traditional title not recognized under the said law and/or without the approval of the appropriate authorities.”

According to Ogie, “The state government hereby wishes to assure all concerned that firm and decisive action will be taken to prevent the actualization of this illegal and sacrilegious act and that all persons found to have been involved in the conception and/or execution would face the full wrath of the law.”

“The Edo State Government, therefore, calls on all citizens to be calm, law-abiding and rest assured that government is firmly on top of the situation,” he assured.

In his own reaction, the owner of Rialto Hotel, in a statement he signed on Thursday, said he understood the implications of turbaning a Sultan in a Kingdom where there is an Oba.

Read the full text of his statement:

“The attention of His Royal Highness Dr. Osazuwa Aiwerioghene Iduriase JP, Enigie of Eyaen and Chief Executive of Rialto Hotel has been drawn to a coronation invitation of Sultan Idriss Addano as the Sultan of Shuwa Arab of Edo State which has been schechtled to hold at Rialto Hotel Eyaen between Aagpust 21st and 22nd 2021.

“The Enogie of Eyaen used this medium to dicsociate himself and Rialto Hotel from the said coronation ceremony, stating that the publication of the use of Rialto Hotel for that event is malicious and was done in bad faith.

“According to His Royal Highness Dr. Osazuwa Aiwerioghene Iduriase JP, the people in question approached him that they want to use Rialto Hotel for a party, and later turned it to a coronation ceremony of Suttan of Shuwa Arab of Edo State without his consent.

“Enogie Osazuwa Iduriase said as a traditional ruler and custodian of the culture and tradition of Benin peopie, he is very much aware of the implication of such coronaton ceremony in Benin Kingdom and that he will never be part of it directly or indirectly.

“Furthermore, the Enogie of Eyaen states that he is aware that there can never be two kings in Benin Kingdom in whatever guise and that the Benin Kingdom recognises the existence of only one Sultan in Nigeria which is the Sultan of Sokoto.

“Dr. Idriase however warned those planning to use Rialto Hotel for such coronatrcon ceremony to desist immediately, adding that his investigations revealed that the said group have not made any financial commitment to Rialto Hotel for the said event, but wert ahead to publicise in the media, a situation that the Enogie described as a calculated attempt to bring his name and of Rialto Hotel to public ridicule and disrepute.”