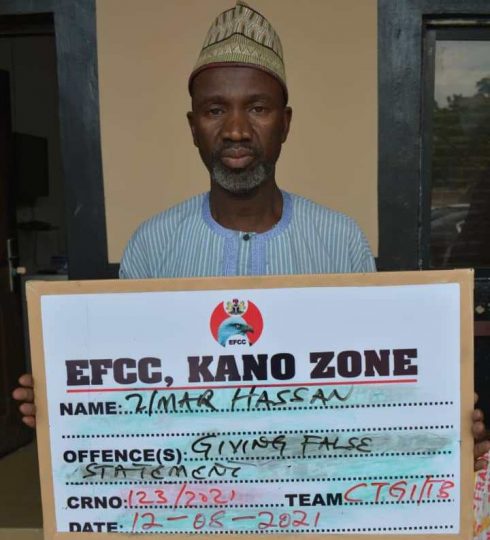 Umar Hassan, an assistant headmaster at Goron Dutse Primary School in Dala Local Government of Kano State and a surety in the case of one Abdulkadir Mohammed Sani was on Friday sentenced to six months imprisonment by Justice Zuwaira Yusuf of the Kano State High Court.

He was jailed for presenting false information to mislead operatives of the Kano Command of the Economic and Financial Crimes Commission, into granting bail to a suspect in a criminal case being investigated by the agency.

The Court had on August 12, 2021 convicted the defendant after he pleaded guilty to a one count charge of false information but reserved sentencing till August 20, 2021.

The charge read, “that you Umar Hassan on or about 13th December, 2017, at Kano, within the Jurisdiction of the Kano State High Court, Kano did commit an unlawful act to wit: gave false information to an Officer of Economic and Financial Crimes Commission by representing yourself as a brother to one Abdulkadir Muhammad Sani who is under investigation, whom you later took on administrative bail as a surety and who is now at large, whereby you failed to produce him when required by the Commission and you thereby committed an offence contrary to Section 39 (2)(a) and Punishable under Section 39 (2)(b) of the Economic and Financial Crimes Commission Act, 2004”.

The defendant’s trouble began after he stood as a surety for one Abdulkadir Mohammed Sani who is being investigated by the Kano Zonal Command of the Commission for alleged offences of obtaining by false pretence and forgery.

When the defendant failed to produce the principal suspect at the required time, it was discovered that all the information given by him, including the claim of being a brother to the suspect, were false.