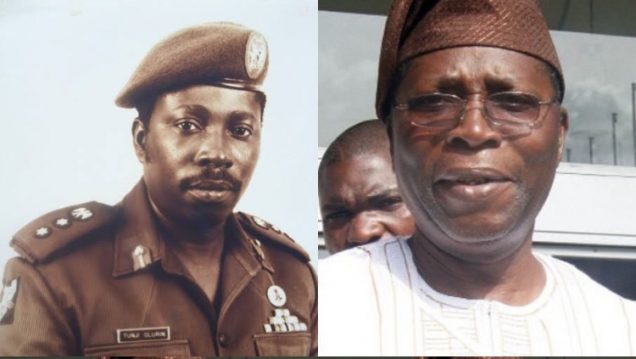 A former governor of Ogun, Otunba Gbenga Daniel, Sen Solomon Adeola, and Prince Gboyega Isiaka have described the death of Brig.-Gen. Adetunji Olurin a big loss to Ogun and Nigeria.

Daniel, in a press statement issued on Saturday, said he received the news of the death with shock.

Olurin, who was an indigene of Ilaro in Ogun, died on Saturday at the Lagos University Teaching Hospital (LUTH) after a brief illness.

Daniel said that Olurin was an eminent statesman and a disciplined officer who served Nigeria and Ogun with grace and candor.

“I recall his sound support toward our move to render our services to Ogun in 2003. Indeed, he was one of the earliest persons consulted and he gave us his support.

“Olurin faithfully served as the founding Chancellor of the Tai Solarin University of Education (TASUED) during my administration.

“His passing on has left a huge vacuum at a time when our nation needs more leaders of thought to help navigate the present challenges,” he said.

Daniel said that he was, however, comforted by the fact that the deceased had gone to rest having played his part ‘on this side’.

He prayed for God’s continued support for the family of the deceased.

Also, Sen. Solomon Adeola, the Chairman of the Senate Committee on Finance, in a condolence message, described Olurin as “a true patriot and a nationalist”.

Adeola said that the death of Olurin was a loss, not only to Ogun but also to Nigeria and the international community.

“He was a true patriot and a nationalist that sacrificed much not only for the unity of Nigeria but peace and security in the West African sub-region and the African continent.

“His expertise in security and administration will be sorely missed,” the senator stated.

The senator prayed for the peaceful repose of the deceased and that God should grant the family he left behind the fortitude to bear the loss.

Another indigene of Ogun, Prince Gboyega Isiaka, described the death of Olurin as ” the loss of a great icon”.

Isiaka, who was the governorship candidate for the African Democratic Congress (ADC) in the 2019 polls in Ogun, stated that Olurin dedicated his life to the service of humanity.

“He was a consummate military officer whose intervention in crucial national assignments left indelible footprints on the sands of time.

“He was also a seasoned administrator who did creditably well when called to serve as a military governor and later in life as a sole administrator,” he said.

Isiaka said that Olurin’s death meant deprivation of an illustrious son and a mortal icon for the people of the Ogun-West Senatorial District of Ogun.

He noted that; “his death came at a season when his fatherly advice was needed in navigating a new national democratic order.

“We thank God for his life and we will surely miss him and all that he represented for the larger part of his 76 eventful years on earth.

“May Almighty God forgive his sins, grant him eternal rest and give the Olurin family and all his loved ones the strength to bear the huge loss,” he prayed.