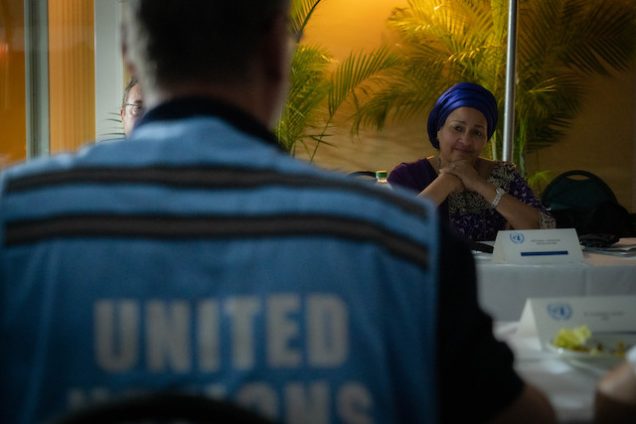 United Nations Deputy Secretary-General Amina Mohammed on Friday praised the resilience of the Haitian people after massive earthquake and tropical storm of August 14, 2021.

Mohammed who was on a two-day mission to Haiti said the country needs every support in this critical moment, adding that the UN Development Programme will do its utmost to support them.

The former minister also said that relief teams were working day and night to provide humanitarian support for the people.

The UN deputy chief was in Haiti to express the UN’s unwavering support to the Haitian people following the earthquake that devastated the country six days ago.

The number of affected people continues to climb in the aftermath of the 7.2 magnitude earthquake that hit Haiti’s southern peninsula.

The quake was followed by Tropical Storm Grace, which caused flooding in the quake-affected areas.

According to authorities, an estimated 600,000 people need humanitarian assistance.

During her mission, Mohammed met with affected communities in the earthquake-damaged city of Les Cayes.

“We stand here in solidarity with Haiti and are in awe at the incredible work the national authorities and the UN agencies are doing to help in these difficult times,” she said.

Mohammed met with Prime Minister Ariel Henry and reiterated the UN’s support for the struggling Government.

Accompanied by Achim Steiner, Administrator of the UN Development Programme (UNDP), they also met with the UN Country Team, as well as with members of civil society.

They visited the South Department, which was particularly affected by the quake, met with people impacted in Les Cayes and visited the Immaculate Conception Hospital.

Mohammed said there were lessons to be learnt from the earthquake to do things differently so that Haiti can recover better.

This, she underlined, “will require investing in long-term development and supporting Government leadership”.

UNDP Administrator Achim Steiner said: “What I have seen on this visit is devastating so much destruction and suffering. And yet, at the same time I have seen the solidarity and hope of the Haitian people in the face of such a tragedy.

“Haiti needs our support in this critical moment. The UN Development Programme will do its utmost to support the people of Haiti in this hour of need as well as in the ongoing recovery and reconstruction.”

The visit is to draw international attention to the increasing humanitarian needs following Saturday’s devastating earthquake.

During three days of field visits, he is scheduled to engage with internally displaced people, local authorities and national and international responders.

Rajasingham is also expected to meet national authorities and diplomatic representatives in Port-au-Prince.