Liverpool cruise on with comfortable win at Anfield 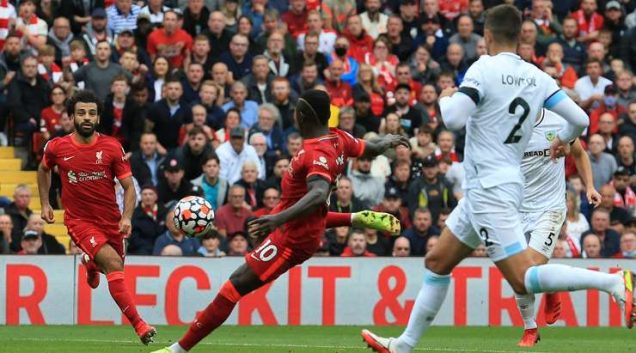 Liverpool moved to the top of premier league on Saturday with a comfortable  2-0 victory over Burnley at Anfield.

The Reds have now won their two matches so far and will remain on top of the EPL pending tomorrow’s matches with United and Chelsea likely to overtake them if they win comfortably on Sunday.

The homers wasted no time in taking the lead on 18 minutes from a Diogo Jota’s goal.

Jota ran onto a clever lofted pass from Konstantinos Tsimikas and easily beat the keeper with a header into the bottom right corner from close range.

Mohamed Salah looked to have doubled Liverpool’s lead on 27 minutes but VAR ruled out the goal.

Harvey Elliott had played the ball to the feet of Salah, who hit a tremendous first-time shot inside the left post. The goalkeeper was unable to keep it out, but VAR came to the rescue of Burnley.

Sadio Mane, however, gave Liverpool the second goal on 69 minutes as he unleashed a first-time shot from inside the box and beat the goalkeeper into the bottom right corner.

Virgil van Dijk almost gave the home side the third goal as he latched on to a cross inside the six-yard box and headed at goal.

If it was not for one of the defenders making a save on the goal line, he would have been celebrating a goal.

Roberto Firmino had a great opportunity from mid-range on 90 minutes. His powerful volley was directed towards the bottom left corner, but Nick Pope was alert and made an astonishing save!