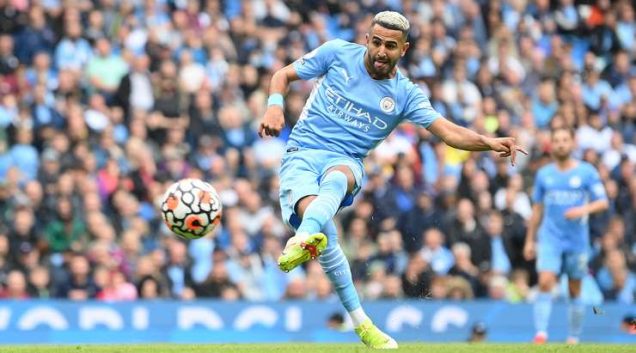 Defending champions, Manchester City bounced back on Saturday to hammer Norwich City 5-0 at the Etihad Stadium.

City had lost their opening game to Tottenham last Saturday, but demolished Norwich to bounce back.

Tim Krul scored an own goal on seven minutes to give Manchester City an early lead.

The homers added a second goal on 16 minutes after a great through ball by Gabriel Jesus, which set up Ferran Torres inside the box, and he made no mistake and bang the ball into the bottom right corner, but the goal was ruled out.

Jesus this time around put the ball on a plate for Jack Grealish, who scored with a simple close-range finish to give City 2-0 lead on 22 minutes.

City had to wait till 64th minute before Aymeric Laporte scored the third goal. He was in the right place at the right time to pounce on the rebound inside the box and gleefully rifled the ball home.

Raheem Sterling made it 4-0 for City, firing home from very close range after latching on to a pass from Gabriel Jesus.

Riyad Mahrez, who came in for Grealish on 75 minutes scored the fifth goal for City on 84 minutes.

He darted into the box to collect a fantastic lofted pass from Ruben Dias and unleashed a powerful shot directed into the bottom left corner.