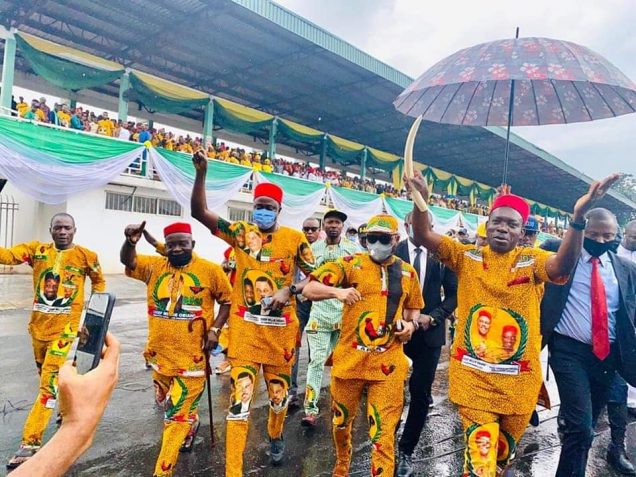 The Independent National Electoral Commission (INEC) on Thursday, August 19, 2021, released a revised list of candidates for the November 6, 2021 governorship election in Anambra State.

The new list released after a meeting held by the electoral body in Abuja, contained the name of Prof. Charles Soludo as the candidate of the All Progressives Grand Alliance (APGA). Soludo’s name was a replacement for Michael Umeoji who was earlier listed as APGA’s candidate.

INEC had in its first list of Anambra governorship candidates, recognized Umeoji as the candidate of APGA on account of a Jigawa High Court judgement in favour of the Jude Okeke-led faction of the party. Soludo’s name and particulars with that of his running mate, Dr. Onyekachikwu Ibezim, forwarded to INEC within the period for submission by Chief Victor Oye, believed to be the properly elected national chairman of APGA, was ignored by the electoral body.

Speaking on the latest development, Festus Okoye, INEC’s commissioner for information and voter education, said the new list of candidates was as a result of a superior court order received by the commission on APGA, as well as substitution of candidates’ names by different political parties.

Okoye said INEC was served with the verdict of the Kano Division of Court of Appeal, which set aside the earlier judgement of the Jigawa High Court on APGA leadership. Hence, the election management body had no choice than to comply by enlisting Soludo’s name as originally submitted by the Oye-led camp.

Reacting to INEC’s compliance with the ruling of the Kano appellate court, the Oye-led APGA, in a statement by the national publicity secretary, Barrister Tex Okechukwu, applauded the electoral umpire for publishing the name of Soludo and Ibezim as the governorship and deputy governorship candidates of the party for the Anambra gubernatorial election.

APGA expressed great delight that after weeks of suspense and bewilderment, INEC had brought some relief by obeying the Kano Court of Appeal judgment. The party, however, lamented that “the electoral body almost destroyed the nation’s democracy by publishing the name of somebody who had no business being there in the first place.” It congratulated millions of its supporters for their steadfastness, courage and loyalty to APGA.

Tex said: “We thank our numerous supporters, well-wishers and friends across party lines for standing by us throughout the trying period.”

Congratulating Soludo and Ibezim on the feat and praying God to bless and keep them for the task ahead, he added: “Together we will work to repeat the 21/21 record we set in 2017, because our government in Anambra State has performed creditably.”

The news of the inclusion of Soludo’s name on the INEC revised list as the authentic candidate of APGA was reportedly greeted with jubilation among the party members and government officials in Anambra State.

A special assistant on media to Governor Willie Obiano of Anambra State, Mr. Chidiebele Obika, for instance, was reported to have described INEC’s recognition of the erstwhile Governor of Central Bank of Nigeria, CBN, as the best news of the year, noting that it was a good omen for APGA.

But the decision of INEC did not go down well with Umeoji. He condemned the removal of his name from the modified list, arguing that the electoral agency’s action was in contempt of a valid order of the Owerri High Court, which affirmed his candidacy. In the same vein, Okeke, said he would institute contempt proceedings against the electoral body, insisting that Umeoji is the standard-bearer of APGA in the November 6 guber poll.

According to him, “The Court of Appeal Kano Division did not make any finding that Victor Oye is Chairman or that Prof. Soludo is candidate of our Party. The Court only set aside the judgment of the Jigawa High Court for want of jurisdiction.

“In the absence of any direct order by the Appeal Court, the judgment that conclusively determines the question of who is Chairman and Candidate of APGA is the judgment B. C. Iheka of the Owerri High Court reaffirmed by Justice V. C. Isiguzo of the same High Court.

“Both the judgment and order from the Honorable justices of the Owerri High Court had been served on INEC before this contemptuous action of changing the name of our candidate.”

The said Owerri High Court judgement, now being relied on by the Okeke camp (after the nullification of the Jigawa High Court order), to maintain that Umeoji remains the APGA candidate was given on July 28 and reaffirmed by the same court (not a higher court) a day before INEC released the new list.

Observers have wondered how Okeke would be threatening INEC with contempt proceedings in respect of an Owerri High Court order when the commission simply acted in line with a superior court ruling that quashed the previous Jigawa High Court judgement it obeyed to publish Umeoji’s name in the first list released on July 16. How would INEC be seen if it discards the Kano appeal court judgement and works with the Owerri High Court order on the APGA leadership tussle?

It sounds illogical and preposterous to many political watchers that Okeke and his group could still be talking about a High Court judgement even after the Kano Court of Appeal has clearly settled the matter on APGA leadership with the invalidation of the Jigawa High Court verdict.

The Appeal Court sitting in Kano had on August 10, overturned the Jigawa High Court judgement delivered on 30th June, instructing INEC to acknowledge the Okeke faction of APGA. The appellate court justices, in their ruling, unanimously held that the Jigawa High Court had no territorial and substantive jurisdiction to entertain the case in the first place. The justices were reported to have declared Okeke and his group as “meddlesome interlopers” and asked the electoral body not to recognize their faction.

The Okeke camp had instructed their lawyers to proceed to the Supreme Court to appeal the Kano appellate court verdict. Informed analysts therefore feel that the appropriate thing to do is for the Okeke group to await the outcome of their appeal at the apex court, rather than trying to needlessly intimidate INEC with a lower court order.

Meanwhile, the Oye-headed APGA has inaugurated the National Campaign Council of Soludo as the authentic candidate of the party ahead of the governorship poll. Governor Obiano performed the inauguration with himself as the Chairman.

Oye at the inauguration said APGA was poised to emerge victorious in the guber election with every legal obstacle out of the way, stressing that no force would stop the will of the masses at the polls. Describing the combination of Soludo and Ibezim as formidable, he said: “Having done well, the governor (Obiano) prayed for a successful successor and that prayer has been answered because Soludo has come to conquer. He will succeed Obiano and deliver on all his campaign promises.”

Umeh, the Chairman, APGA Peace and Reconciliation Committee, congratulated Oye’s leadership for making sure INEC acknowledged Soludo as the duly nominated candidate of the party. The former parliamentarian said Soludo’s candidacy was a collective decision of the leadership and stakeholders of APGA.

He said: “When we chose Soludo as the Governorship Candidate of our party, it was a careful decision made by the party including the Leader (Governor Obiano) who pointed at him as his worthy successor. We followed suit in endorsing him, supporting him and voting for him massively at the primary conducted on the 23rd of June 2021.

“During the time of publishing names of candidates, there was a twist and Soludo’s name was missing, but the party came together and fought for it and eventually the Court Of Appeal in Kano did justice to the matter paving the way for the publication of his name. That is why I am congratulating the party for this feat. Only by this act yesterday, the confusion that has been raining in the media has been effectively arrested. Prof Soludo is the Candidate, he is going to contest the election on November 6th and he is going to win with APGA!”