Thousands move to Ode Itsekiri for Olu of Warri coronation 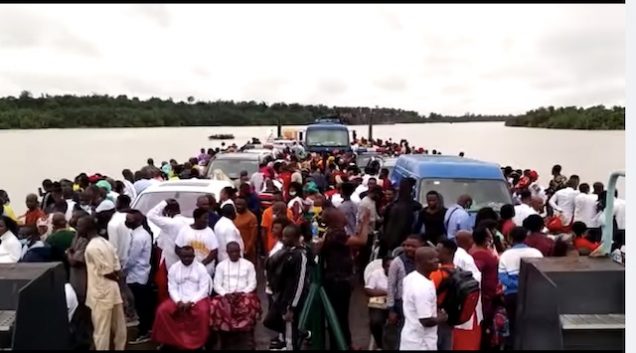 Thousands of Warri residents trooped to various jetties on Saturday to board ferries to Ode-Itsekiri, for the coronation of Prince Tsola Emiko as the 21th Olu of Warri.

Traditionally, Itsekiri Monarchs are crowned at Ode-Itsekiri, (a small Island on the Warri River), the ancestral home of the Itsekiri people, but their palace is located in Ajamimogha, in Warri.

Commercial activities in Ugbangue, Ajamimogha and other areas in the usually boisterous oil rich city of Warri were paralysed.

Few vehicles were also on the road.

Many of the guests heading for the coronation ceremony converged at the various jetties as early as 6 am.

While transporters were able to ply their trades, shops are not currently opened for business. Taxis are also rare on the roads..

The development resulted in commuters groaning over their inability to get transportation to their various destinations.

At the time of filing this report, thousands of Itsekiri indigenes have gathered at the Warri boat yard, Warri Club, Uwangue Waterside, Ifiekporo waterside.

They were awaiting the Olu-designate to appear for a boat regatta along the Warri river and a journey to Ode-Itsekiri where his coronation will be held.