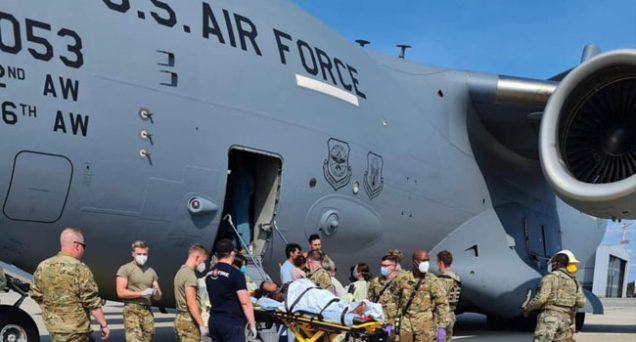 Medical support personnel from the 86th Medical Group help an Afghan mother and family off a U.S. Air Force C-17 just after she delivered a child aboard the aircraft. Photo: US Air Force

An Afghan woman has delivered a baby girl just after touching down aboard a US evacuation flight.

The US Air Mobility Command posted photos of the woman on its social media platforms early Sunday.

She gave birth in the cargo bay of a U.S. Air Force C-17 aircraft moments after landing at Ramstein Air Base, Germany on Saturday.

“During an evacuation flight from an Intermediate Staging Base in the Middle East, the mother went into labor and began experiencing complications due to low blood pressure,” the Air Mobility Command said.

“The aircraft commander made the decision to descend in altitude to increase air pressure in the aircraft, which helped stabilize and save the mother’s life. Upon landing, Airmen from the 86th MDG came aboard and delivered the child in the cargo bay of the aircraft. The baby girl and mother were transported to a nearby medical facility and are in good condition.”

The flight was carrying Afghans from an intermediate staging base in the Middle East.

Since the Taliban took over the Middle East nation last week, thousands of Afghans have fled the country, fearing for their safety.