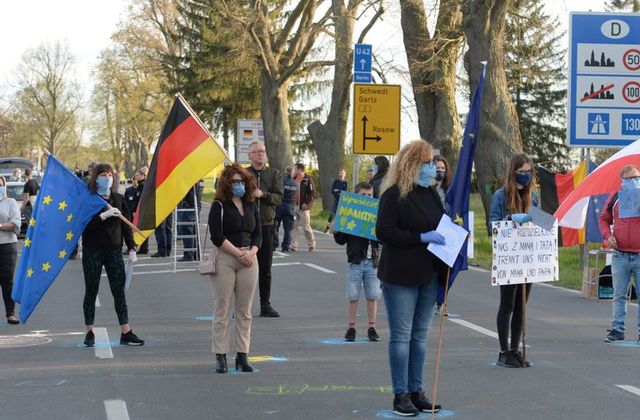 Around 300 people gathered at the Polish side and some 100 at the German, some wearing face masks.

Groups protested across Germany on Sunday, demanding the quick and unbureaucratic evacuation of refugees in Afghanistan following the Taliban takeover of power.

Under pouring rain, hundreds of demonstrators gathered in front of the Federal Chancellery in Berlin.

The Berlin police spoke of about 1,700 participants, predominantly younger people. They marched with umbrellas through the government district to the Foreign Office in the afternoon.

A broad alliance of groups called the protest under the motto “Afghanistan: take responsibility – start now!”

An Afghan speaker said he went on a hunger strike in front of the Foreign Office five days ago. He said that his brother had worked for the Bundeswehr in Afghanistan for nine years and that Germany had abandoned him and his family.

“They will be slaughtered,” the speaker said. A banner read in large letters: “You have failed.”

In Kiel, several hundred people demonstrated on Sunday for an airlift of threatened people in Afghanistan.

The refugee organization Seebruecke (Sea Bridge) counted about 600 participants, while the police said the real number was about half that. There were also protests in Frankfurt.

The demand is that, in addition to local forces, people who are threatened by the Taliban because of their social commitment should also be flown out, said the Seebruecke spokesperson.

All Afghans in Germany should also be given refugee protection, according to the appeal.

A survey by the opinion research institute YouGov found that nearly two-thirds of Germans are in favour of granting protection to people from Afghanistan who are under threat from the Taliban.

The online survey commissioned by Seebruecke found that 63 per cent supported the German government helping vulnerable people in Afghanistan, such as women and those facing political persecution.