Trump steps up attack on Biden over Afghanistan debacle 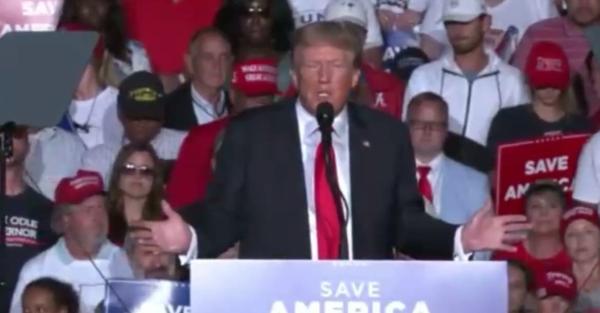 Former U.S. President Donald Trump on Saturday stepped up his attack on successor Joe Biden’s handling of the retreat of U.S. forces from Afghanistan.

He called it “the greatest foreign policy humiliation” in U.S. history.

In his first reaction, he said Biden had proven to be “embarrassingly incompetent”.

“Biden’s botched exit from Afghanistan is the most astonishing display of gross incompetence by a nation’s leader, perhaps at any time,” Trump said at a boisterous rally packed with his supporters near Cullman, Alabama.

Trump, a Republican who has dangled the possibility of running again for president in 2024, has repeatedly blamed Biden, a Democrat, for Afghanistan’s fall to the Islamist militant Taliban.

However, the U.S. withdrawal that triggered the collapse was negotiated by his own administration.

Taliban leaders are trying to hammer out a new government after their forces swept across the country as U.S.-led forces pulled out after two decades, with the Western-backed government and military crumbling.

For his part, Biden has criticised the Afghan military for refusing to fight, denounced the now-ousted Afghan government and declared he inherited a bad withdrawal agreement from Trump.

At the rally, Trump blamed the situation on Biden not having followed the plan his administration came up with and bemoaned U.S. personnel and equipment being left behind as troops withdrew.

“This is not a withdrawal. This was a total a surrender,” he said.

Trump said the Taliban, with whom he had negotiated, respected him. He suggested the quick takeover of Afghanistan would not have happened if he was still in office.

“We could have gotten out with honour,” Trump added.

“We should have gotten out with honour. And instead we got out with the exact opposite of honour.”

After tearing into President Joe Biden, Trump went on to boast of his chummy relations with the Taliban, who he described as “great negotiators” and “tough fighters.”

He insisted that “with me in office the Taliban would not have ever dreamt of capturing our air field or parading around with our American weapons.”

He then appeared to suggest that more U.S. troops should perhaps be sent back to Afghanistan, where the Biden administration’s handling of a withdrawal of U.S. troops originally brokered by Trump has sparked chaos and been met with bipartisan outrage.

It was not clear which “45,000 people” Trump was referring to, but the Biden administration has said as many as 15,000 Americans remain in Afghanistan after the Taliban took over, and that U.S. troops will stay in the country until all Americans are evacuated.

Elsewhere in his speech, Trump blasted Biden for failing to “stop the virus” before apparently shrugging off the risk of an outbreak at the Saturday night rally amid Alabama’s crippling surge in infections.

“I’m shaking hands with everybody backstage. I say, well, I don’t know, is this a good thing or bad? You’ll read about it, three or four days, maybe. Hopefully not,” he said.

He briefly urged supporters to “take the vaccine” before walking it back as members of the crowd reacted negatively.

“That’s okay, that’s all right. You got your freedoms. But I happened to take the vaccine. … But you do have your freedoms, you have to maintain that, and you got to get your kids back to school.”

Cullman, the city where the rally was held, declared a state of emergency Friday ahead of the rally.

Local officials and hospital managers said they needed extra resources to deal with the gathering because current staff are so strained caring for coronavirus patients.

Vaccination rates in Alabama lag behind the rest of the U.S.

COVID-19 has filled emergency room beds across Alabama to such an extreme degree that the manager of one of the state’s largest hospital chains said this week that the number of available beds was lower than the number of patients, that Alabama’s capacity had gone “negative” by 29 beds.