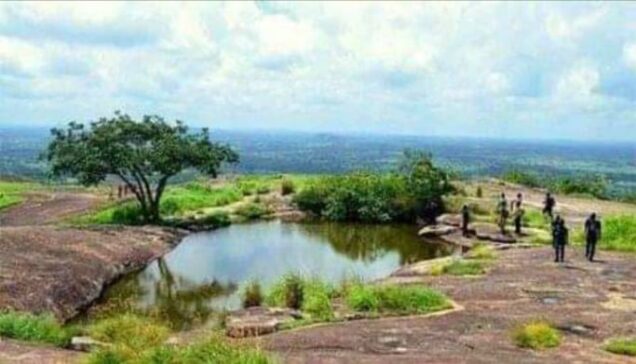 Oba Lamidi Adeyemi, the Alaafin of Oyo, gave an advice to Nigerian government at the weekend as members of Iyake Lake festival visited him.

He charged governments at all levels in the country to invest more in tourism to promote sustainable economic and national growth.

His visitors were members of the Central Planning Committee for the ‘Iyake Festival’.

They were led by Oba Ademola Folakanmi, the Alado of Ado Awaye.

The Iyake Festival is aimed at developing Iyake Suspended Lake to meet international standards that would attract tourists globally.

The Lake is the only natural suspended lake in the world and a pride of Africa.

The Alaafin charged governments at all levels to develop tourist centres in their areas towards revenue generation and rapid socio-economic growth for the betterment of Nigerians.

According to him, aggressive pursuit of tourism development can drive and sustain the economy instead of relying on monthly allocation from the federation account.

The traditional ruler said the result of research he did on how to boost the economy of Oyo town spurred him to embark on promotion of culture and tourism.

He said his efforts have since been yielding positive results, particularly in the hospitality industry.

The Alaafin said that such efforts are exactly what the Alado of Ado Awaye, Oba Ademola Olugbile Folakanmi, is doing to develop Iyake Suspended Lake to meet international standards that will attract tourists globally.

He commended the Alado for his efforts toward attracting the attention of government as well as investors to develop Iyake Suspended Lake and other attractions on Ado Hill.

Oba Adeyemi gave his royal blessings to the efforts of the planning committee and prayed for outstanding successes on both the ‘World Tourism Day’ and Iyake Festival.

Earlier, the Alado expressed gratitude to Oba Adeyemi for endorsing the forthcoming ‘Iyake Festival’, scheduled to hold in December.

He also thanked the Oba for presenting a palace representative to serve on the committee for the big event.

The Alado had sought the assistance of Oba Adeyemi in getting both local and foreign investors as well as philanthropists to develop Iyake Suspended Lake.

Oba Folakanmi also expressed special gratitude to Gov. Seyi Makinde over the hosting right given to Ado-Awaye community for the celebration of this year’s World Tourism Day.