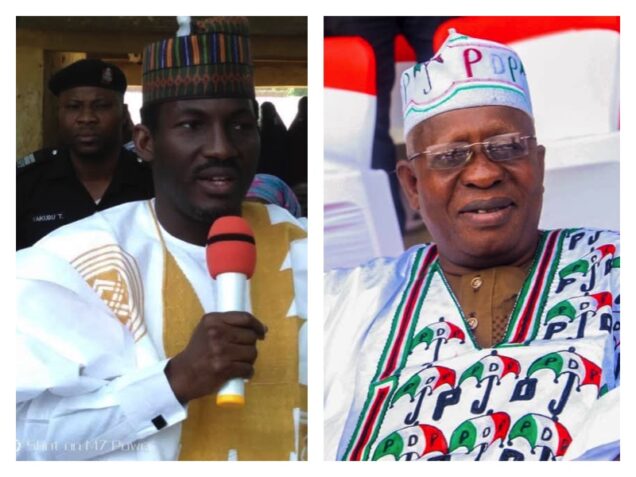 In PDP, it seems the centre can no longer hold as two men appeared Tuesday, each claiming to be the rightful occupant of the office of acting chairman.

The struggle followed the suspension of Uche Secondus as chairman of the party, by a Rivers high court on Monday.

Both said they are the rightful replacement of Secondus pending the determination of the restraining order slammed on him by Governor Nyesom Wike’s inspired court.

In laying claim to be Secondus successor, Akinwonmi cited the party’s constitution:

“Section 45(2) (b) of the constitution of the People’s Democratic Party empowers me to summon and preside over party meetings in the absence of the national chairman.

“In the foregoing circumstances, as Deputy National Chairman (South) of the People’s Democratic Party, after the consultations and in exercise of the aforesaid powers, hereby deem it fit and proper to postpone the National Working Committee meeting earlier scheduled for today until further notice to allow for broader consultations in the overall interest of our party”.

Nazif also summoned a meeting of the National Working Committee (NWC) with about seven of the 18-member NWC in attendance.

It was at the meeting, held at the NWC hall at the party secretariat that Nazif pronounced himself the National Chairman, reports TheNation.

He claimed that Akinwonmi, is incapacitated as he has been battling a protracted stroke.`

According to him, Akinwonmi has not been attending NWC meetings and other party functions in the last nine to 10 months.

Nazif sustained his argument with Section 47 (4) of the PDP Constitution.

“On this note, distinguished NWC members, I hereby take full charge of the Peoples Democratic Party (PDP) as Chairman in an acting capacity”.

While Akinwonmi postponed the NWC meeting scheduled for today, Nazif said the much awaited National Executive Committee (NEC) meeting will hold on Friday, August 27, 2021 by 10am.

As clear as the day, the PDP crisis is now widening, defying solutions.

The crisis, which reared its head a few months ago, has continued to linger with disruptive effects on the activities of the party.

The crisis was ignited by moves by Wike to remove Secondus from office.

Akinwonmi is in Secondus’ camp while Nazif is championing Wike’s cause.

Matters came to a head, as Secondus opposed the resolution by the NWC to hold the national convention in October, rather than December.

He said there were outstanding state and zonal congresses and if these were not concluded, they may provide grounds for litigation.

But the Wike camp has rejected Secondus’ argument, saying that it was a ploy for him to stay put in office.