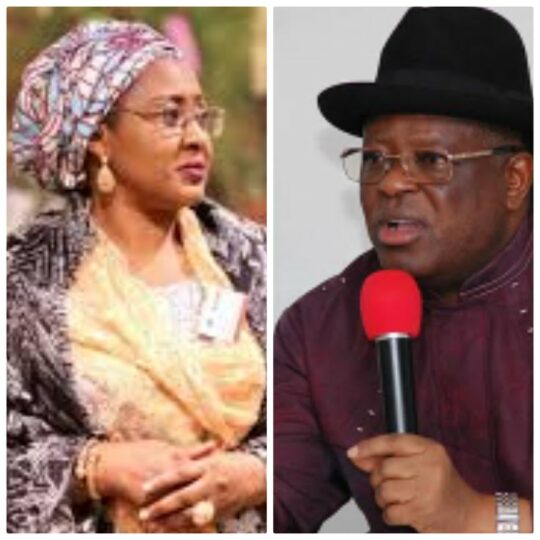 Gov. Dave Umahi of Ebonyi has condoled with the wife of the President, Mrs. Aisha Buhari, on the passing away of the wife of the late Maj.-Gen. Thomas Aguiyi-Ironsi, Nigeria’s first military Head of State.

The governor also condoled with the First Lady on the death of Mrs. Adanna Okpara, wife of the late former Premier of the defunct Eastern region.

The governor, in a message to Mrs. Buhari, on Tuesday in Abakaliki, expressed his deep condolences.

He expressed his deep shock with the passing away of the two ‘iconic’ mothers.

“I received, with the deepest sympathies, the sad news of the death of our matriarchs and legendary mothers, Dame Victoria Aguiyi-Ironsi, wife of the first Military Head of State of Nigeria, Maj.-Gen. Johnson Aguiyi-Ironsi.

“We are equally saddened by the death of Lady Adanna Okpara, wife of the late Premier of the defunct Eastern region, Dr Michael Okpara, on Aug. 22 and Aug. 23 respectively at a bracket age of 97.

“Late Victoria Aguiyi-Ironsi was the first lady of quintessential charisma, who showed a deep commitment to national unity and integration, both in the husband’s unitary government and in her private life.

“Late Adanna Okpara was a pillar of support to her husband’s governance principles.

“She was a strong believer in her husband’s philosophy of ‘pragmatic socialism’ and ‘green revolution’ as a panacea to national development,” he said.

Although the governor said that the two ‘graceful women of inestimable dignity’ would be missed, he, however, said that he was consoled by the quantum of fond memories that radiated their lives and times.

“At this moment of grief, therefore, I most heartily convey the heartfelt condolences of the government and people of Ebonyi to their Excellencies, Mrs. Aisha Buhari and the wife of my dear brother and Governor of Abia State, Mrs Nkechi Ikpeazu.”

Umahi also conveyed the deep-felt sympathy of the government and people of his state to the families of the late Aguiyi-Ironsi and the late Okpara.