Nervousness as Maria, Pere, Cross, three others up for eviction 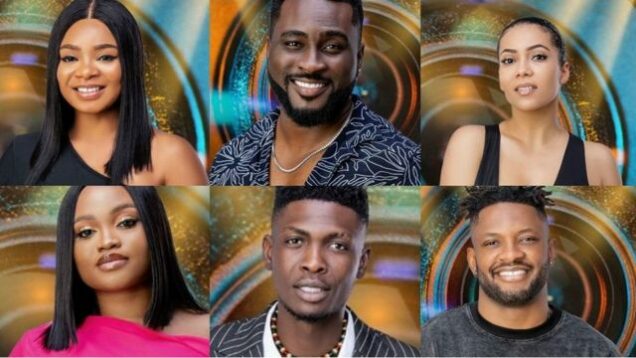 The housemates up for eviction

For Cross, JMK, Maria, Pere, Queen, and Sammie, this is their first time getting nominated and a lot to take in.

Although they all put on a brave front, they were nervous as they dreaded the possibility that it could be their last week in the House.

Besides being nominated for Eviction, Maria also received a Strike for microphone infringement, so she wasn’t in the best of moods last night and felt upset about the situation.

Also upset by the nomination, she declined to go watch the Showmax movie treat Liquorose invited her for. “I don’t want to watch movie around people I don’t want to be with,” she said.

She probably felt betrayed by the rest of the Housemates and couldn’t bear to be around them. She was eventually replaced by Queen, who was also Nominated. Guess she didn’t want the Nominations blues to keep her from having a great time.

Although JMK had been put up for eviction by Maria in the previous nomination twist, last night was the real deal. She too had also been issued a Strike for Microphone infringement and this was quite a load for her to bear.

However, she understood why she was nominated. According to her, it makes sense since she was new to the House and most of the other members had formed bonds with one another.

Despite her situation, she spent time consoling Cross who had started packing his bags in anticipation for Sunday’s eviction. She reassured him that he wasn’t going anywhere and there was no need to start packing so early since there was still ample time.

Voting closes on Thursday and the two housemates with the least votes will exit the show on Sunday.