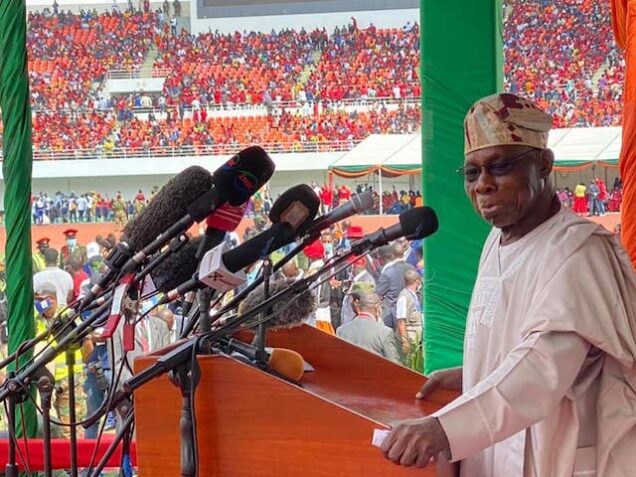 Decked in trade mark Agbada, Obasanjo said he was in Zambia to celebrate with the people over the peaceful transition from one President to another and one political party to another.

He said the Zambians have shown that good things can come out of Africa and have set a good example.

“You have done it for all of Africa. We are proud of you”, he said.

There were other dignitaries across Africa who witnessed the inauguration of Hichelema as Zambia’s 7th President.

The Zambians themselves filled the Lusaka stadium, with many clad in red T-shirts and caps, the colour of the United Party for National Development.

They started gathering at the stadium as early as 4 a.m. to secure seats even when the ceremony was scheduled to start at 11 a.m.

In his speech delivered after he was inaugurated, Hichilema said his government would work for the benefits of all citizens.

He said his government would fix the economy and grow it in order to lift people out of poverty.

“You have entrusted us to run the affairs of this country and we will be your servants,” he said.

The new president thanked his predecessor, Edgar Lungu, for his service to the country and for the smooth and peaceful transfer of power.

He further invited the private sector to work with his government to grow the economy and political parties to work with the ruling party in unity and put political differences aside.

According to him, macroeconomic stability will be crucial as well as reducing public debt which has affected investment in other sectors of the economy.

Hichilema, who becomes Zambia’s seventh president, further said fighting corruption will be the hallmark of his administration.

He, however, said the fight against corruption will be done in a professional way by giving institutions powers to fight the vice.