Arsenal record first win of the season in Carabao Cup 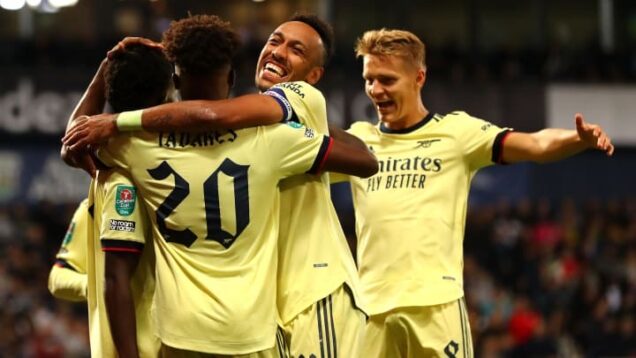 Arsenal record first win of the season against West Brom

Pierre-Emerick Aubameyang led Arsenal to their first win this season as he scored a hat-trick to help the Gunners  oust West Brom in the Carabao cup.

After a few early moments of promise from the hosts, the Gunners took control of things with Aubameyang tapping home the rebound from Bukayo Saka’s saved shot.

The Arsenal captain doubled his tally soon after, this time picking up the scraps after Nicolas Pepe had raced through and struck the post.

Just before the end of first half, the visitors then put the game to bed with Aubameyang this time providing the assist for Pepe to make it 3-0.

Arsenal remained dominant and untouchable after the break.

First Saka got in on the act, latching onto Martin Odegaard’s delicious back heel and firing home

Aubameyang then completed his hat-trick in fine fashion, cutting in from the left-hand side before curling his effort past the grasp of David Button.

The win brought renewed hope for a fresh start for the London club as they look to pick their first win of the season in the Premier League against Manchester City on Saturday.