Centre calls on LASG to address plights of elderly 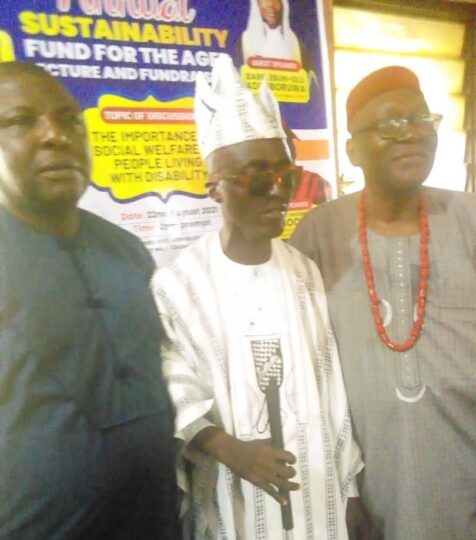 The conveners of the event

A Non-Governmental Organisation, Center for Disability Issues, has called on Lagos State Government to as a matter of urgency address plight of elderly persons, just as it advised government on planned evacuation of beggars and hawkers from streets in the state.

Convener of Centre for Disability Issues, Comrade Kehinde Oshilaja, spoke at The Annual Sustainability Fund for the aged, lecture and fundraising, organised by the Centre at Lisabi Hall, Ebute-Metta, Lagos.

Oshilaja, who earlier commended the efforts of Governor Babajide Sanwo-Olu, especially, for numerous efforts embarked by his administration in the last two years, added that he should also exercise caution on the steps being proposed by government, especially on evacuation of beggars and hawkers from the streets of Lagos.

The Convener, who spoke on the topic, “The importance of social welfare to people living with disability,” reminded the state government that elderly and aged people that has no wherewithal to feed themselves would definitely take to begging.

He said if adequate arrangements had been put in place by government to take care of the elderly and aged people, nothing of that nature would occur.

Oshilaja, however, posited that adequate arrangements like regular payment of stipends of at least N10,000 should be organized for the elderly every month to cushion the effect of their hardship.

He said it was only when this arrangement must have been in place before they could think of evacuating beggars off the streets in Lagos.

“We at the Centre for Disability Issues are appealing strongly to Lagos State Government to put in place adequate arrangements to take care of the elderly in the society, at least with minimum of N10,000 monthly stipends to take care of themselves, or else we would rise up en-maase as a body to protest,” Oshilaja said.

In his goodwill message, High Chief Agboola Awodiran, the Araba of Oworoland, said government should be responsible and responsive at all times to the plight of the aged and the elderly, especially the people living disabilities.

Also Chief Ifagbenga Oyesanya, called on government to make available all that would make life easy for people living with disability and the senior citizens in the society.

Also in his remarks, Comrade Wale Balogun called on all tiers of government to live up to their responsibility and cater for the people living with disability as at when due, adding that empowerment of political appointees too should be targeted at specific needs of the constituents.