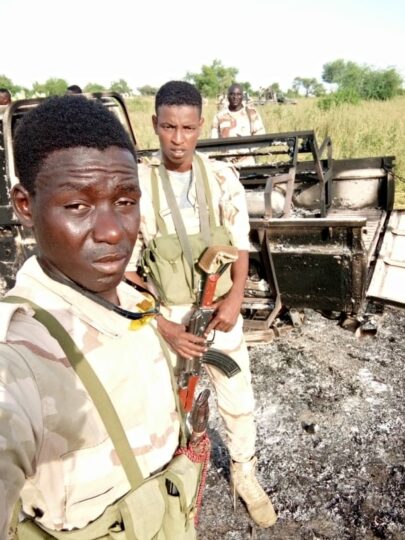 Boko Haram terrorists lost 50 of their men Tuesday night in a massive attack they launched on a town, south east of Niger Republic.

“The positions of our defence and security forces in Baroua, in the Diffa region, were attacked by several hundred Boko Haram elements who came from Lake Chad”, the minister said in the statement.

Nigerien soldiers “neutralised around 50 terrorists” and “secured a large quantity of arms and ammunition”, he added.

The Multinational Joint Task Force said it was their position that was attacked by the hoodlums.

In a statement, the chief of military public information HQ MNJTF N`Djamena Chad Colonel Muhammad Dole said the troops of MNJTF Sector 4 Diffa displayed uncommon acts of gallantry and bravery when their location was attacked.

“The troops tactically canalized the criminals to their effective killing zone, brought heavy fire on them and neutralized scores of the terrorists, while others escaped with various degree of injuries.

“At the end of the encounter, a total of Forty-Three (43) dead bodies of BHT/ISWAP insurgents were scattered around the engagement areas.

“One terrorist suspected to be their leader was caught alive and large cache of arms, ammunitions were recovered and four enemy gun trucks were destroyed.

“Regrettably however, seven gallant MNJTF soldiers paid the supreme sacrifice, while four other soldiers sustained varying degrees of injuries and are being treated in a military hospital.

The Force Commander (FC), MNJTF, Major General Abdul Khalifah Ibrahim who was in HQ Sector 4 Diffa on 25 August 2021 on the final leg of his familiarization/operational visit to the sectors, commended the selfless sacrifice and act of gallantry, demonstrated by the troops.

The attack in Diffa came only two months after around 6,000 people returned to the Baroua area in June after fleeing jihadist attacks in 2015, under a programme to encourage around 26,000 inhabitants in the region to go back to their homes.

Authorities had said that 19 villages like Baroua where more than 26,000 had returned recently were under “reinforced” protection — although Diffa governor Issa Lemine also hailed the “positive development of the security situation” as he welcomed returnees.

Those who fled had been living in safer villages, UN camps or with relatives elsewhere in the region.

Around 300,000 displaced people from Niger or neighbouring Nigeria have found shelter in the Diffa region from jihadist groups like Boko Haram and the Islamic State group affiliate ISWAP, according to the UN.

Earlier this month, Niger said it would build an airbase there to step up its anti-jihadist fight.

But it must also contend with jihadists who commit regular bloody attacks in the wider Sahel region stretching across the southern fringes of the Sahara, including the IS affiliate ISGS.

On August 16 at least 37 civilians including women and children were killed in an attack on a village by attackers who arrived on motorbikes.

Two weeks before, 15 soldiers were killed in an ambush.

The world’s poorest country by the benchmark of the UN’s Human Development Index (HDI), Niger is facing jihadist attacks on two borders.

The southeast of the country near the marshy Lake Chad region is being hit by jihadists from Nigeria’s Boko Haram and its splinter group, the Islamic State West Africa Province (ISWAP).

The Diffa region hosts around 300,000 Nigerian refugees and locally-displaced Nigeriens.

Western Niger, meanwhile, is battling bloody cross-border raids from insurgents in neighbouring Mali, who include followers of the Islamic State in the Greater Sahara (ISGS).