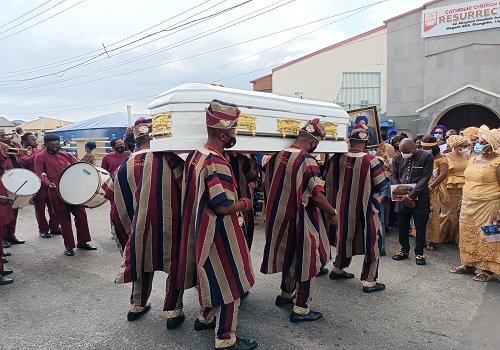 Veteran Nollywood  actress  Rachel Oniga who died on Friday, July 30 has been buried in Lagos.

The burial was a private ceremony.

The final colourful lying-in-state, preceding the interment  held on Friday at the Catholic Church of Resurrection in Magodo.

Rachel Oniga, died at the age of 64. She was a member of the Actors Guild of Nigeria.

Oniga, began her acting career in 1993, shortly after her divorce. She hails from Eku, Delta State and got married to a Yoruba man.

Her marriage collapsed after she claimed another woman bewitched her husband and father of her children.

Among her popular works are Out of Bounds, Owo Blow, The Wedding Party, 30 Days in Atlanta and Power of Sin.