Obasanjo: Enemies of Nigeria will soon be disgraced 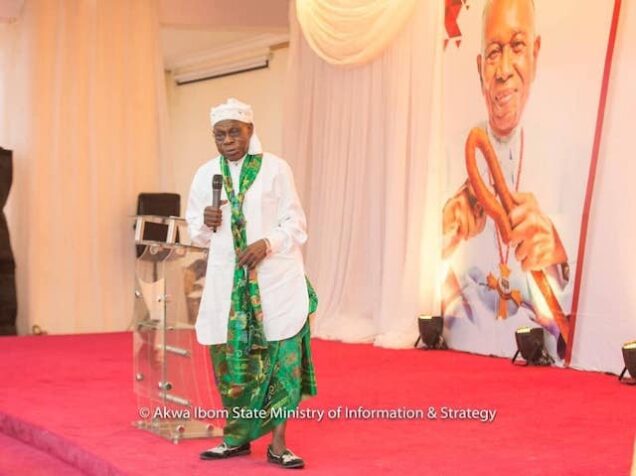 Former President Olusegun Obasanjo said the enemies of Nigeria will soon be disgraced.

He said it was those enemies who have been fanning the embers of disunity in the country.

Obasanjo made the statement in Lagos on Friday at a book launch in honour of His Eminence Sunday Mbang, Prelate Emeritus of the Methodist Church Nigeria.

“My Life and Times”, an autobiography of Mbang, was to celebrate the prelate on his 85th birthday, which was on Aug. 26.

According to Obasanjo, Nigeria will not disintegrate despite the current challenges it is facing.

“The cost of disintegration is higher than the cost of being together.

“We have everything to gain by being united than disunited,” he said.

The former president, who was the Convener of the event, said that the celebrator was a gift to Nigeria and the world.

He described Mbang as one who could lay down his life for the love of his country.

The Chairman of the event, Gov. Emmanuel Udom of Akwa Ibom, said that the prelate had been a father figure to him and a role model to many.

According to him, as one that speaks truth to power, his counsel has been of great significance to the good people of Akwa Ibom since he retired to his home in 2006.

He described the prelate as one who has been living a Christ-like life with many achievements on all fronts.

He said that the people would forever be grateful to God for his presence and good health.

Also, His Grace, Isaac Ayobamiola, the Archbishop of Lagos Methodist Nigeria, in his message, said that the prelate was an angel that lived among men.

He said that one’s contact with the prelate would show his saintly conduct and his advice on issues were of wisdom that led to solutions.

The Book Reviewer, Mr Tony Kan, said that the book was a total chronicle of the real life of the prelate with all the goods and not too goods of challenges of life.