Ortom to Buhari: Address my message rather than messenger 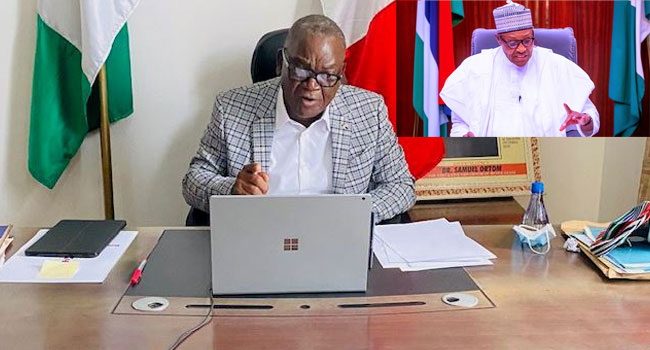 Benue State Governor Samuel Ortom unfazed by the attack on him by President Buhari’s aide, has urged the Presidency to address the issues he raised in his interview with Channels Television on Wednesday.

He rejected the accusation that he was fanning the embers of discord in his state as alleged by Mallam Garba Shehu, Buhari’s SSA Media.

“The tone of the statement shows the quality of Presidency Nigeria currently has. They abandoned the message and went for the messenger,” said Ortom’s Chief Press Secretary (CPS), Terver Akase.

“We advise the Presidency to focus on ending the killing of innocent Nigerians, fix the economy as it promised, and stop the corruption under their watch.

“They can’t run away from their responsibility. They were brought to power to serve the country, not to oppress the people and suppress their freedom of speech.

“They are on record to have publicly promised during their campaigns before the 2015 elections that they would respect the rights and freedoms of Nigerians, if elected.”

Governor Ortom in the interview on Channels Television raised a number of concerns bordering on the worsening security situation across the country.

Channels TV according to reports was flagged by the National Broadcasting Commission, the regulator, over what it. called “the anti-Buhari” interview.