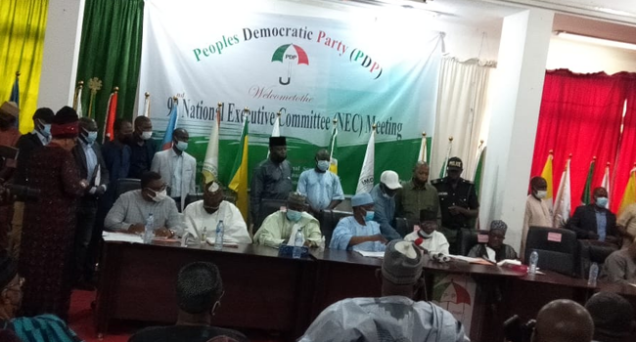 This happened despite a court order reinstating him as the party’s National Chairman.

The meeting was presided over by Elder Yemi Akinwonmi.

However, a letter obtained by newsmen showed that Secondus asked Akinwonmi to preside over the meeting in his absence.

“I hereby request you to preside over the National Executive Committee meeting of the Party, taking place today, 28th August, [email protected] 12 noon, in my absence,” the letter read.

Akinwonmi, at the meeting, however, sued for peace among the leadership of the party.

He said consultations within the party are yielding desired results.

Meanwhile, the Chairman of the party’s Board of Trustees, Senator Walid Jubril, said the problems in the party are not insurmountable.

He noted that challenges and disputes are a fact of life in any party, but how they are resolved matters most.

He advised the party not to fail Nigerians, as it remains the last hope of citizens.

“There is no way the PDP can win elections if it is divided,” he added.

Other matters discussed at the meeting include the country’s deteriorating security situation and high cost of living owing to the weakness of the naira against other currencies.