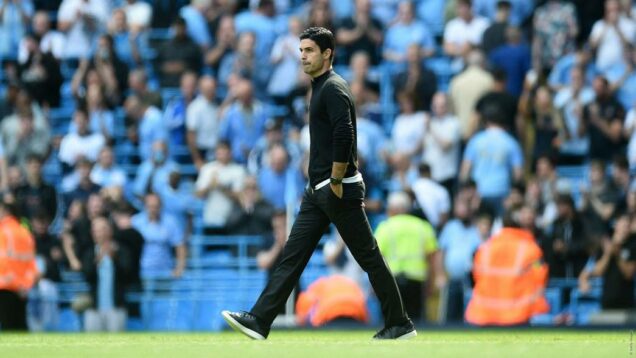 Arsenal manager, Mikel Arteta has blamed poor defending, bad officiating and a red card for their 5-0 loss against Manchester City.

The Spaniard manager gave this analysis while speaking to Arsenal media in his post-match interview.

“I think we started the game really well and the first time that they came into our box we defended really poorly with the cross and the header and we are 1-0 down.

“In a few minutes we concede the second one and I think it’s a clear foul on Calum, he punches him in the face and the goal is allowed and then after 35 minutes at 2-0, you have to play with 10 men for 60 minutes. That’s a big ask,” he said.

“When you are 3-0 down and with 10 men against this kind of opposition having the extra player, you’re going to find it so difficult to keep the ball at any moment because they’re going to go man to man, and mentally as well after two difficult starts in the season, coming here and starting and competing well and then going down to 10 men is mentally really demanding, so we have to manage the game as best as we could. We conceded another two goals and I’m really disappointed,” he added.