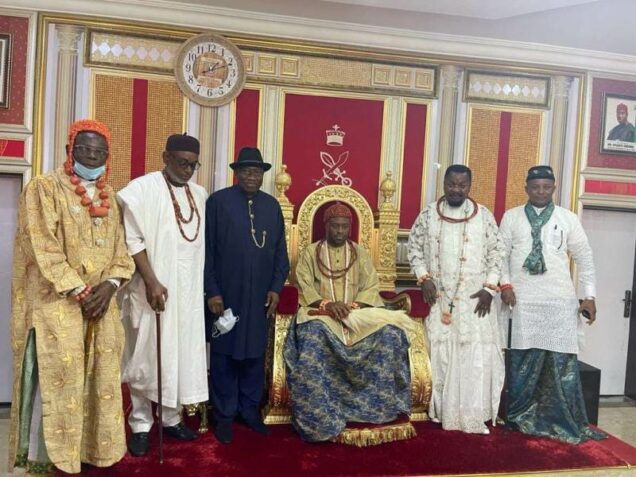 Jonathan and his entourage visited Olu of Warri

The new Olu of Warri was crowned on August 21, 2021 in an elaborate ceremony.

The former president, who paid homage to the monarch during the Coronation Thanksgiving Service of the Olu, held at the Warri Palace chapel, went straight on his knees as a sign of respect to traditional institution.

He said his visit was to congratulate the 21st Olu of Warri, Atuwatse iii on his ascension to the throne of Warri kingdom.

Jonathan said the Niger Delta is pleased to have a young dynamic king with wisdom like the Olu.

“I was to come for the coronation but I could not make it. So I said I should come to pay my respects to the Olu of Warri.

“We have come to join all of you to celebrate. This palace is not new to me.

“I have been close to the palace and I appreciate what the Olu of Warri stands for in the leadership system.

“He is a young man with wisdom. We are pleased to have a dynamic king in the Niger Delta.

“A king that will handle issues on Niger Delta that all of us will be happy. We join your immediate family, the Itsekiri Nation to congratulate you,” Jonathan said.

He told the former president that the region needs to unite and work together in all ways that they can for the peace and progress of the region noting that Nigeria will be better if they do.

“We are indeed aware you had every intention to be with us on Saturday, Olu said.

“I want to use this opportunity to say that in all ways we can work together, let us do.

“Let us start speaking with one voice as a region. I assure you that the message from this throne will be one of unity, peace and progress and the Niger Delta and Nigeria will be better for it.”

The monarch also told the former president that they are proud to be associated with him for what he is doing for Nigeria and the African continent.

“We are very much proud to be associated with you. We are proud of what you are doing in the country and the Africa continent.

Atuwatse III thanked the former president for the visit.