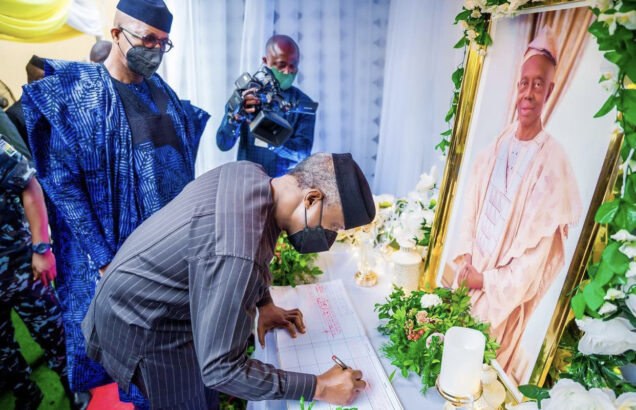 Vice President Yemi Osinbajo has said late Dr Emmanuel Abiodun, the father of Governor Dapo Abiodun of Ogun State, deserved to be celebrated as he lived a good life and left a worthy legacy.

Osinbajo made this remark on Friday when he paid a condolence visit to the governor over the death of his father, who passed away on August 2 at the age of 89.

The vice president was accompanied on the visit by Femi Gbajabiamila, Speaker of the House of Representatives, Gov. Rotimi Akeredolu of Ondo State and former Governor of Ogun, Olusegun Osoba.

Speaking at the Iperu-Remo, Ogun, residence of the deceased, Osinbajo said the late Abiodun deserved to be celebrated as he lived a good life and left a worthy legacy.

Osinbajo said he was on the condolence visit on behalf of President Muhammadu Buhari.

“I say that I am here on the president’s behalf because otherwise, I should be a host here not a visitor; this, as you all know, is home for me; so, I am here just because I also have to represent the president.

“There are three reasons at least why we should be rejoicing and not mourning; the first is that papa lived a long life; almost 90, a year to his 90th birthday; that’s a good number; it’s a good way to go.

“The second is that before he died, I do not think there is any dream of his or any prayer of his that was not answered; I think one of his important prayers was that his son, who aspired to be governor of Ogun, will in fact be governor.

“So, papa saw the inauguration of his son as governor; was there for his first year, second year and did so with great joy; the third reason is that he has left behind a worthy legacy,” he said.

He said he was pleased to say it was all for rejoicing and celebrating the life of an incredibly great man.

Osinbajo said that the late Abiodun was known for his own contribution to society not only as a teacher, but also the fact that all through his life, he supported worthy causes and was a progressive.

He prayed God to console members of the family for the loss, grant them mercy, long life and protect them always.

Gbajabiamila and Akeredolu had earlier taken turns to speak glowingly of the late Abiodun and commiserated with Gov. Abiodun and the family.

In his response, Gov. Abiodun thanked the vice president for the visit.

He said that the first call he got right after the news of the death of his father was broken to him was from Osinbajo.

Gov. Abiodun said his late father would be missed greatly as he loved his children and wife immensely as well as contributing a lot to the society through his devotion to God and duty.

The governor thanked the Almighty God for a life of service that his late father lived.

Gov. Abiodun expressed appreciation to everybody that had shown solidarity with him on the loss of his father as their sympathies had made the loss less painful.

He said that obsequies for his father would be held from September 7 to September, 9.