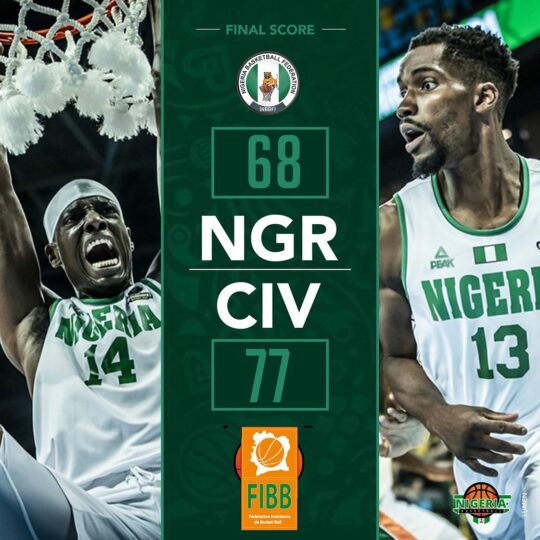 They however have a second chance of qualification for the quarter-finals, with their final group position earning them a quarter-final qualifying fixture on Tuesday.

In their final group phase match, played at the City Arena in Kigali, the Nigerian senior men’s national team failed to raise their game and lost in three of the fixture’s four quarters.

With Cote d’Ivoire having won their first two games, just like Nigeria, and holding on tight to the group’s top spot, D’Tigers were aware only a win was needed.

It would earn them a top-place finish and an automatic qualification to the quarter-finals which will begin on Wednesday.

D’Tigers defeated the Ivorians 83-66 on Sept. 6 of 2019 when they last met, in the classification round of the FIBA World Cup, but this counted for nothing on Sunday.

With Nigeria now parading a different set of players in Kigali, and not even the team which impressed at the Tokyo Olympics, D’Tigers have been largely unimpressive.

D’Tigers had earlier beaten Mali 81-73 and Kenya 71-55, and they have now finished second in their group with five points from three matches.

Earlier in the day at the same venue, Kenya had beaten Mali 72-66 to finish third in the group.

Cote d’Ivoire advanced to the quarter-finals automatically, while group runners-up Nigeria will face Group D’s third-placed team which could be Uganda.

Group D’s second-placed side, South Sudan, are already ahead of Uganda in their final group phase game.

If they hold on to second place, they will then face Kenya in the final quarter-final qualifier on Tuesday.