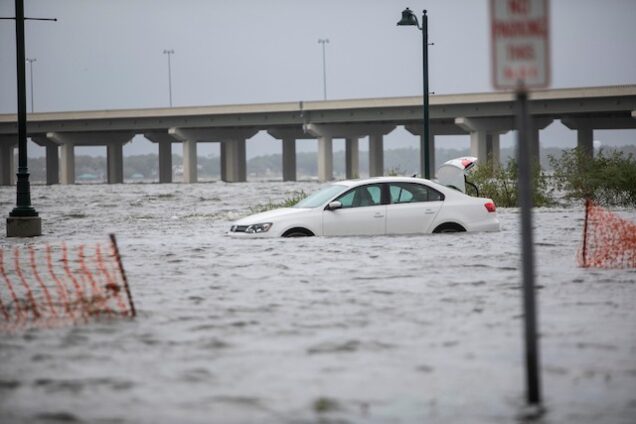 A car wades through flooded road in Louisiana amid Hurricane Ida

More than 300,000 Louisiana homes and businesses lost electricity Sunday, as Hurricane Ida made landfall as an extremely dangerous Category 4 storm.

The storm forced those who did not flee to brace themselves for the toughest test yet of the billions of dollars spent on levee upgrades following Hurricane Katrina 16 years ago.

Hundreds of miles of new levees were built around New Orleans after the devastation of Katrina, which made landfall 16 years ago to the day, inundating historically Black neighborhoods and killing more than 1,800 people.

The state “has never been more prepared,” he said, predicting that no levees in the Hurricane & Storm Damage Risk Reduction System protecting the greater New Orleans area would be overtopped.

“Will it be tested? Yes. But it was built for this moment,” he said. Edwards said some levees in the state’s southeast not built by the federal government were predicted to overtop.

“As soon the storm passes, we’re going to put the country’s full might behind the rescue and recovery,” President Joe Biden said after a briefing at the headquarters of the Federal Emergency Management Agency in Washington.

Just three days after emerging as a tropical storm in the Caribbean Sea, Ida had swelled into a Category 4 hurricane on the five-step Saffir-Simpson scale with top sustained winds of 150 miles per hour (240 km per hour), the NHC said.

Palm trees trembled as rain blasted in sideways through New Orleans on Sunday, where retired 68-year-old Robert Ruffin had evacuated with his family to a downtown hotel from their home in the city’s east.

“I thought it was safer,” he said. “It’s double trouble this time because of COVID.”

Hours later, howling winds sucked out windows on the hotel’s third floor, and blue curtains were seen fluttering outside.

Predicted storm surges were already happening, exceeding 6 feet (1.83 m) in some parts of the coast.

Parts of Highway 90 that runs along the Louisiana and Mississippi Gulf Coast had become a choppy river, according to videos posted on social media.