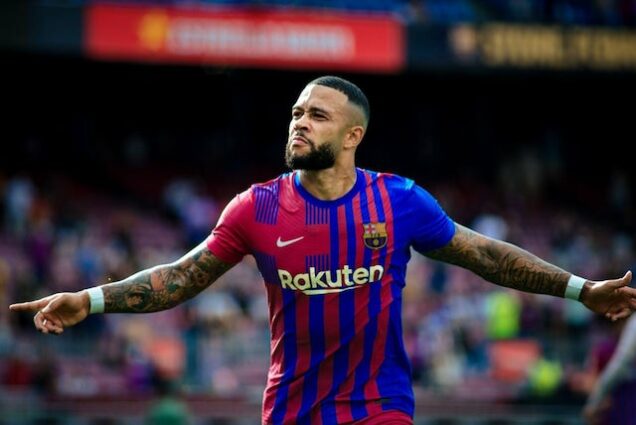 Memphis Depay struck an exquisite winner as FC Barcelona edged Getafe 2-1 at Camp Nou, with the Dutch forward able to celebrate a feat last achieved a decade ago.

The 30th-minute strike on Sunday made Depay the first FC Barcelona player to be involved in a goal in each of his first three appearances in La Liga since 2011.

The last player to achieve this was Cesc Fabregas.

It was a classic finish from the Dutch forward which saw him match the former playmaker.

Depay had an assist in FC Barcelona’s opening win over Real Sociedad, then scored in the draw at Athletic Bilbao.

His first league goal at home for the Blaugrana proved to be decisive.

But Sunday’s disjointed display from the hosts was still enough for three points, thanks to the former French side Lyon man.

FC Barcelona made a strong start, with Sergi Roberto sliding home their opener after 99 seconds, the earliest they have scored in a LaLiga game under Ronald Koeman.

Jordi Alba’s low cross from the left was cleverly dummied by Martin Braithwaite at the near post and Sergi Roberto powered in the finish.

Getafe pulled level in the 19th minute, however, with a pair of former Barca players involved.

Sandro struck a fine finish low into the left corner after exchanging passes with Carles Alena on the edge of the penalty area.

Depay’s moment arrived on the half hour.

He collected a pass from fellow Dutchman Frenkie de Jong on the left to cut in, teasing defender Juan Iglesias before smashing a powerful shot inside the near post.

Marc-Andre ter Stegen was back for this match after knee surgery, and the Barca goalkeeper took a clattering just before half-time.

Enes Unal challenged forcefully as the German clutched a long-range shot from Mauro Arambarri at the second attempt.

Ter Stegen saved from Nemanja Maksimovic just before the hour as Getafe sought a second equaliser.

FC Barcelona were far from convincing, still obviously missing the influence of former team captain Lionel Messi, and the second half was awfully scrappy.

But in the absence of anything discernably threatening from a lacklustre Antoine Griezmann, Depay’s match-winning qualities made the difference.

Even if he did squander a golden chance late on, volleying over from close range, he could still be forgiven