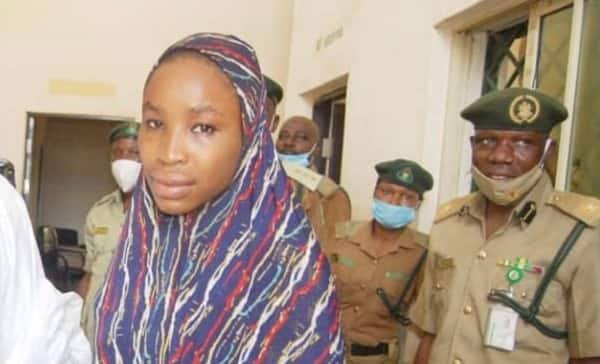 Rahama Husseini has been released from the Kano correction center after living for almost 7 years in the facility.

Rahama was said to have killed her husband, 3 days after her father forcefully married her off to the man.

However, she was pardoned by Governor Umar Ganduje of Kano state.

Dr. Umar Gwandu, the Special Assistant on Media and Public Relations to the Minister of Justice confirmed the development on Sunday.

He said: “In 2015, Rahama said to be 14 years at the time, was alleged to have been forcefully married off by her father and three days after, whilst her husband attempted to consummate the marriage, a struggle ensued which led to his unfortunate death.

“While granting State Pardon to Rahama, Governor Abdullahi Ganduje of Kano State promised that the state government will support her rehabilitation process.

Gwandu also confirmed that 30 other inmates were also released from the Kano center.

He said the release was facilitated by the Presidential Committee on Correctional Centres Reform and Decongestion.

“The Committee was in Kano for an on-the-spot assessment of the conditions of Correctional Centres and inmates with a view to making payment of fines for inmates who were convicted of minor offenses with the option of fines but unable to pay the fines as well as a general review of peculiar cases.

“Similarly, an additional 7 inmates were released due to old age”.