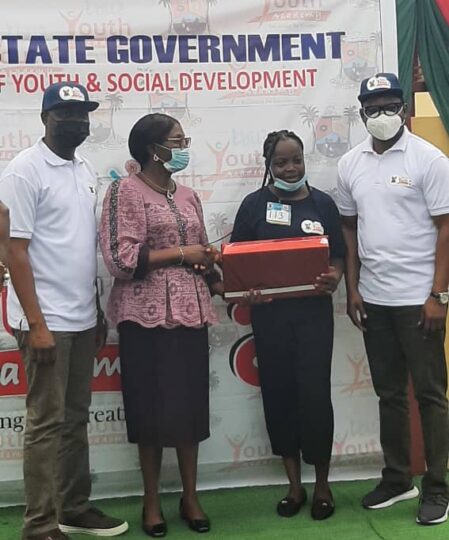 Youth training and empowerment has been described as a viable way of building new generation of leaders with positive mindsets for volunteerism and leadership.

Wife of Lagos State Governor, Mrs. Ibijoke Sanwo-Olu stated this on Friday during the official closing ceremony of the 2021 IBILE Youth Academy held at the Abesan Youth Center, Ipaja.

The Ibile Youth Academy organized by the Ministry of Youth and Social Development, according to the Governor’s wife, was designed to build a new generation of leaders with positive mindsets that embrace the virtue of citizenship, leadership and volunteerism for self-development.

Represented by Wife of Tutor General/Permanent Secretary Education District 1V, Mrs. Foluke Olajide, the First Lady maintained that concerted efforts must be geared towards discovering, nurturing the positive energy of our burdened youth population. Saying that “One of the best ways to do this, is what the IBILE Youth Academy is exemplifying”.

Sanwo-Olu said: “this initiative will help our youth push boundaries, build their confidence and harness their personal development which in turn will contribute to the growth and development of our dear state and by extension the Nation.”

“The state government has continued to provide impactful platforms for youth and other age classes, in order to make a lasting impact in the society”.

While reaffirming that the Sanwo-Olu led administration will continue to prioritize youth welfare in its agenda, the First Lady advised the youth population to resolve to also contribute their quota to nation building.

Earlier, the Commissioner, Ministry of Youth and Social Development Mr. Olusegun Dawodu, said that the state has the highest youth population in the country, which confer a huge responsibility on the state to seriously address challenges that comes with the huge youth population.

According to him, “The evolving social-economic issues, new and innovative opportunities as well we’re some of the peculiarities of Youth in the state, saying that this shows the need to develop a programme that will further harness youth potentials.”

Dawodu revealed that the initiative has been held consistently over the past three years and has continued to produce State Youth Ambassadors and Divisional Ambassadors who have implemented various pet projects and programmes to address peculiar issues in their communities.

The Commissioner while congratulating the Ambassadors, implored them to step out in confidence to push boundaries and make themselves ambassadors in their various communities and divisions.

The Permanent Secretary, Ministry of Youth and Social Development, Dr. Aina Olugbemiga expressed optimism that the present set of the state youth ambassadorial team are ready to surpass achievements of the previous sets through their constructive contributions for the development of their communities.

He reiterated the government’s commitment to continue to work and encourage the civil society groups and other stakeholders to partner with the Youth in various areas of employment, entrepreneurship, political inclusion, and other areas that will enable the youth to have a better future.

In her remarks, the Coordinator of the initiative, Mrs. Rasheedat Umar said that the programme began with a three day virtual training for over 750 young people across the five divisions of the state, whereby 50 participants were carefully selected from each division for a one-day physical training.

Umar explained that at the end of the one-day training, the best 10 were selected from each division for a 7-day residential training, where they were taken through different leadership topics and tasks.

She said: “the camp training was highly competitive with tasks and responsibilities that produced a state Youth Ambassador and Divisional Ambassador for each division of the state”.

The newly produced 2021/2022 Youth Ambassador, Miss Funmilayo Akannishelle representing the Ikorodu Division, expressed her fulfillment in the training and skills instilled in her and other participants during their stay in the camp.

In her words; “it was an intensive training and we were taught how to be patriotic citizens and great leaders in our various communities, the state and Nigeria as a whole”.

She promised to contribute her quota to the development of the state and advised other youth to take responsibilities as patriotic citizens of the state.